This show was the first time that I remember coming across the comedy double-act Stewart Lee and Richard Herring, although they had worked in radio before that. They were among the writers of On The Hour (which transferred to TV as The Day Today). In 1992 they hosted the BBC Radio 4 series Lionel Nimrod’s Inexplicable World, where they investigated the paranormal, and in 1993 they moved to Radio 1 for Fist Of Fun.

I first heard these shows when they were repeated on BBC7/BBC Radio 4 Extra. What was interesting about the first radio series of Fist Of Fun was that it was around the time that there were major changes to the Radio 1 schedule with many long-serving hosts finally departing, which was a real clash of eras, and there were plenty of jokes at the expense of the likes of Simon Bates. This did well enough to earn them a rather big and young fanbase. 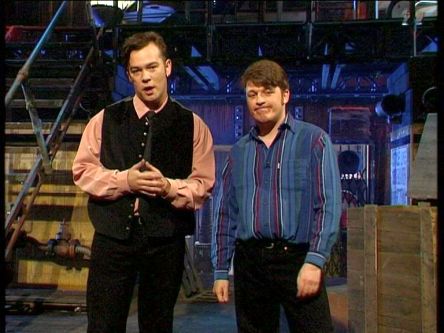 This meant that the show transferred to TV in 1995. There were a lot of great comedy shows on BBC2 around this time (yes, even Glam Metal Detectives), and this was definitely one of them. Fist Of Fun came from a rather dirty and dimly-lit studio. They often reflected on the week’s news, and Herring was rather upbeat, while Lee had a more cynical view. Herring was also a fan of yoghurt and came from Somerset, but he didn’t like to go on about it. 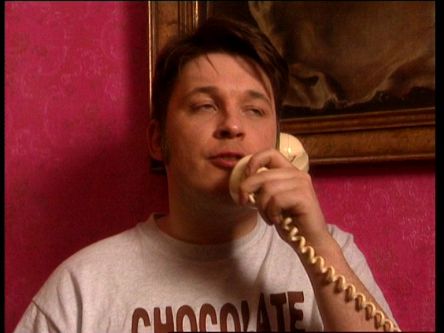 There were also sketches including Simon (bid again, Simon!) Quinlank and his unusual hobbies (and he had a catchphrase!), a shrine dedicated to Julia Sawalha, smelly Peter and his horrible recipes, and Ant and Dec also made a guest appearance. The topical references mean that you can almost date the show to the very minute it was made in 1995, as there’s a joke about the short-lived Kellogg’s Banana Bubbles, the cereal that thinks it’s a milkshake. 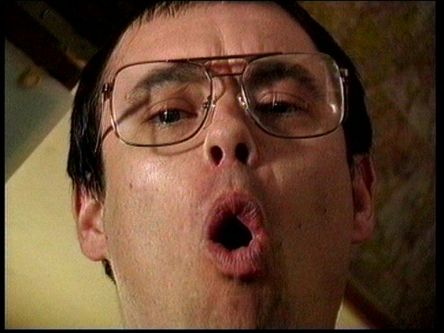 Lee and Herring also had a top-level support cast including Peter Baynham, Kevin Eldon, Rebecca Front, Alistair McGowan, and Sally Phillips. Viewers were encouraged to contribute via post, and the fancy new email and website, and there were also several subliminal pictures and messages. By the end of the series they became popular enough to host an edition of Top Of The Pops, and there was also a book based on the show. 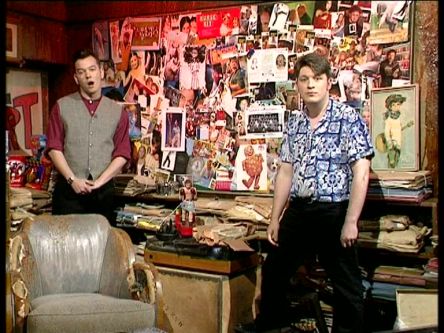 The second and final series moved to Fridays and came from a much brighter and bigger studio. There were also special guest appearances from the real Rod Hull, and Ian News, with everything that people called Ian needed to know. Around the time the series ended in 1996, Lee and Herring did one of those “at home” features in TV Times. “We only ever row about the washing up!” claimed Richard, yeah right. 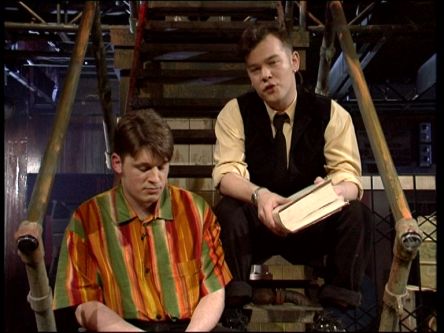 It seems that it was something of a struggle to get Fist Of Fun released on DVD, but all 12 editions have been, and extras include commentaries from Lee and Herring wondering if it was a good as they remembered, along with other cast members, and a few hidden surprises. In 1998 they returned to BBC2 with the new show This Morning With Richard Not Judy, and I’ll review that one soon too.