Here’s a look back at another cartoon that was shown in various timeslots over the years. The Raccoons was a cartoon of Canadian origin, and you can probably guess what type of animals were the main characters. The show was set in the Evergreen Forest, where you wouldn’t see that many humans around (and none at all after the first series), but there were always plenty of animals, and they could all talk as well.

The show began in the early-80s as a series of four one-off specials, and it wasn’t until 1985 that it graduated to a full TV series. A voiceover would feature in the opening sequence, and also at the start of the episode to explain the current story. The main character was Bert Raccoon, who always wore a big sweater that had a “B” on it, I am making an educated guess that this was probably a reference to his first name. 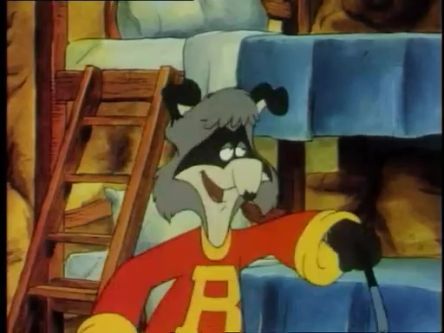 Also featuring are the married couple Ralph and Melissa Raccoon, Schaeffer the sheepdog, and Sophia. The main villain in the show is Cyril Sneer, an aardvark with a hoarse voice who likes cigars. He is making life for everyone in the forest much less enjoyable, and he tries to make money in any way that he can. He makes even Scrooge McDuck seem easy-going and practically penniless by comparison.

Also featuring is Cyril’s son Cedric who was Bert’s friend. He wore big glasses and a bowtie, is the heir to the fortune, and isn’t as mean spirited as his dad. Cyril’s rather useless henchmen were three pigs who spent a lot of time squabbling with each other and often failed to complete their tasks, rather amusingly were only ever credited as simply “Pig One”, “Pig Two”, and “Pig Three”. 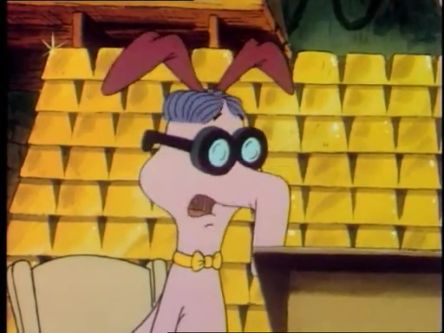 As the episodes pass, lots of other animals feature, and there is also usually a musical interlude in an episode that contained plenty of action. Episodes ended with the song “Run With Us” that was rather catchy, and all of this seemed to go down rather well with critics and viewers. There were 60 episodes of The Raccoons (along with the four specials) in five series, and plenty of these were released on VHS and DVD.

I remember watching some episodes in an early morning slot, but they turned up in many other places (if not the actual main CBBC afternoon strand), including the post-CBBC 5:35pm slot in the mid-80s, and during Going Live! in the early-90s. It was also shown on BBC2 until as late as 2002, and it’s odd to think that this show was still around after CBBC had launched their strange green blob things look.

One thought on “More TV Memories – The Raccoons.”