Blockbusters is one of my favourite game shows, maybe it is actually my all-time favourite, it’s so hard to decide, but it’s definitely up there with the best for me. There have been a remarkable amount of revivals over the years, so let’s see what this one had to offer. This was the third revival (17 years on from the first series on ITV), following on from Sky One in 1994 and BBC2 in 1997, and this was also on Sky One. But who would the host now be?

Bob Holness had long gone. As had Michael Aspel. How about Liza Tarbuck. Now Liza first found fame in the ITV sitcom Watching where she had some terrific 80s hair, which had unfortunately gone by this point. In 2000, she was best-known for co-hosting The Big Breakfast alongside Johnny Vaughan, making one of the more entertaining pairings that show had. 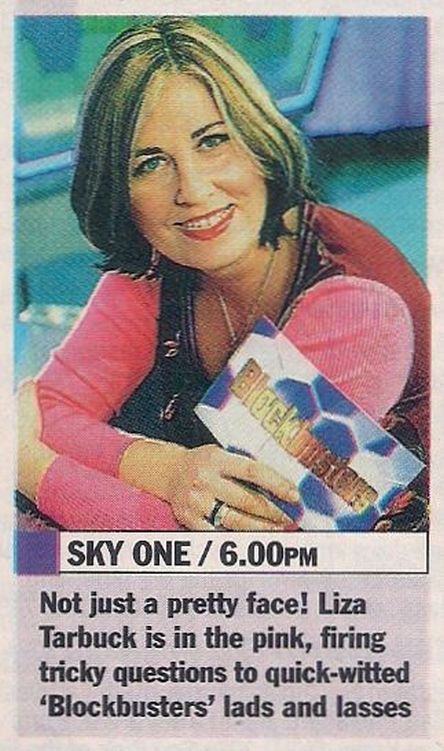 First of all, we have a opening sequence that is accompanied by yet another remix of the famous theme. And it’s now in widescreen! Also, the set from the BBC2 version was recycled (although they didn’t get that much use out of it), although the background in the studio has changed from orange back to the more familiar blue/purple. The show also went back to having teenage students (and their mascots) as contestants (the BBC2 and Challenge versions had adults of all ages).

The purple team had changed back to blue, who were on the left, while the white team were on the right. The gameplay was the same of course, now featuring a computer-generated board, but it was still only £5 for every correct answer, that’s just so stingy. At this point I was actually the right age to go on the show, having watched it so regularly when I was much younger and couldn’t have ever imagined being that old at that point was a rather weird feeling. Why didn’t I go on it? 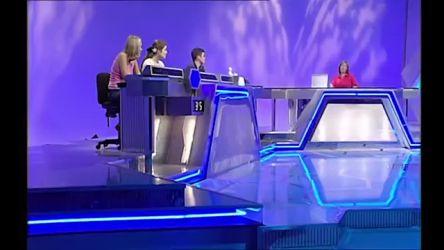 It was a best-of-three, with the losers taking away the consolation prizes of a dictionary book and encyclopedia CD-Rom. I don’t think there were any bonuses hidden behind any questions. The Gold Run was just about the same really, gold to gold in 60 seconds, with £10 for every correct answer if they don’t make it. If they win, they get an incredible prize, one of those very special occasions that money just can’t buy. I also think they went back to having five Gold Runs.

This version of Blockbusters was shown on weekdays at 6pm. It is a surprise to think that even this is two decades ago now. There were 100 editions but there was only one series. Once again, the response from viewers was rather indifferent, although it’s always good seeing the show it just wasn’t considered to be as great as the original version. This didn’t stop Challenge and Comedy Central making their own versions in more recent years.