After reviewing a lot of cartoons recently, I thought that I would go back to another thing that I like to feature on here, which is finding a rather curious TV show on YouTube that came and went with little notice that just makes me go “what?”, and I have to find out more and share its story. One day I was watching some old BBC2 continuity clips on YouTube (because I am always doing that), when I found one that introduced a science-fiction comedy that I don’t remember from the time. They definitely don’t make them like this any more.

In the 1950s, there were several radio series about space exploration, when the idea of travelling to the moon was still a long-off fantasy. Four decades on, one of these series was rescued from the archive and transferred to television. People often say that the pictures radio shows can create in the mind are better than the real ones on TV. We’ll see if that’s the case with this one. 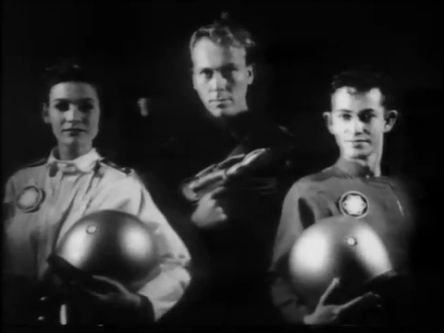 Rocky Star was an Australian series that was shown as part of the comedy show Eat Carpet, although in this country the five-minute episodes were shown individually. The audio from the original version was recycled (check out that crackle!) and the cast mimed to it in a deliberately stilted style (at least I think that it was deliberate). It was made in black-and-white using Super-8 cameras to enhance the old-fashioned feel.

Macho astronaut Rocky (Christopher Morsley), along with his trusty team Diana Moore and Mitch Morgan, star in a spine-tingling adventure called “Flying Saucers”, where they travel the universe in their rocket. They are on the hunt for the alien Zog and his assistant Coz who are terrifying Earth, and it’s up to them to save the day. Every episode starts and ends with a voiceover excitedly explaining the story. And just when it couldn’t seem to get any odder, the cast also like to randomly break into song!

There were 20 episodes of Rocky Star, and the scheduling by BBC2 is rather curious in itself. It was originally shown in 1995 at 6:45pm. Then it disappeared for a while, before returning in 1996, by and 1997 it was being shown at 9:45am, following a wave of CBBC shows, I’m not entirely sure that they even showed every episode, but someone somewhere must remember watching this. It’s no surprise that there hasn’t been a DVD release, and it doesn’t even have a Wikipedia entry. I’m not really sure what the point of doing all this was, but it was another enjoyably odd show.