The Day Today was a show that was a satire of several TV styles, including news, and it is widely regarded to be one of the best British comedy shows of the 90s. So you might wonder why about a decade later a show launched with a similar idea. Well this one wasn’t exactly the same, it was more a parody of the wave of 24 hour news channels that had launched in the years since, although sometimes it does feel like something that is beyond parody.

Broken News was created by the same team behind other shows including BBC Radio 4’s The Sunday Format, which parodied articles that filled broadsheet Sunday newspapers. This show was rather ambitious. Every episode featured one main news story, and we constantly jumped between various channels for their differing coverage. This meant that to make it as realistic as possible there was a huge cast, with 145 people appearing.

So this meant that as we went through the news, business, sport, weather, and so on, there would be various things including on-screen tickers full of useless information, presenters bringing you all the latest as it doesn’t happen, going live to reporters for no reason who have nothing to add to the situation, and so on. Episodes concentrated on international incidents such as a flu epidemic, an island going missing, or a plane hijack.

We saw news channels that sensationalised everything, promoted style over content, and constantly asked viewers to send in their absurd views via email, regional news featuring cringeworthy contributions from the weather forecaster, showbiz news with Hollywood gossip in a similar style to Liquid News, along with business channels frantically discussing the fact that Reggae Mustard is down 9. There was also a channel showing the news from an American perspective.

One of my favourite moments was in the final edition, because it made me think of presenters who feel that they have to remind us about what has happened every five minutes, when the presenter used the turn of phrase “now a reminder in case you’ve just come in, and had no idea”. With a style like that, I’m sure he went on to be very successful as a presenter on BBC Radio 5 Live (see, I can be satirical too). 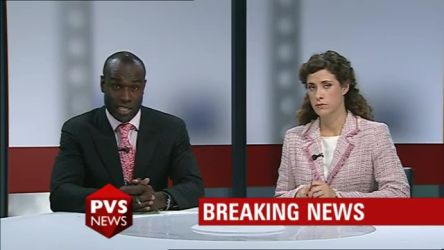 A few of the contributors to Broken News did appear in other things. I spotted Rob Butler who used to present the news on Channel 5 in its earliest days, and one of the anchors of the American channel was played by Claudia Christian who had also been in Babylon 5. Curiously, Tom Goodman-Hill seemed to be the only cast member who played two roles, as a film critic and sport reporter. And one of the reporters always live on the scene was played by Benedict Cumberbatch before he went on to be the most popular and successful actor in the universe. 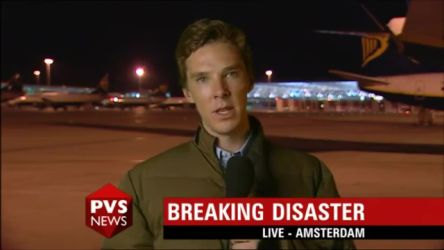 There was only one series of Broken News, and it was always going to have the disadvantage of coming off second-best to The Day Today, but the effort that was put in has to be commended, and watching it back 15 years on it almost seems prophetic of what endless news coverage is like now. There was also a DVD release, and… I’m sorry, but I’m going to have to interrupt myself there because it’s end of this piece. Bye for now.