This is a cartoon that was first shown on American TV in the late-60s. I am not really a big fan of cartoons from as long ago as this, but it is one of the classics from this era, and I do remember watching and enjoying it, so it deserves a review. And as we will see, it has had plenty of repeats and spin-offs. It’s another one that was produced by Hanna-Barbera.

Wacky Races was indeed a rather silly cartoon that featured lots of hot racing action. It featured 11 cars racing against each other, travelling for miles and miles across various American states and beyond. They were all aiming to finish first, and they would stop at nothing to try and be the one to meet the chequered flag and be declared “World’s Wackiest Racer”. 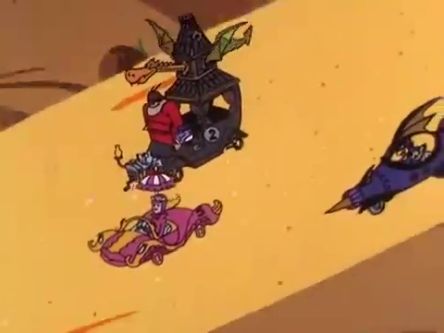 The cars also had names and numbers, and among the drivers were Peter Perfect, The Ant Hill Mob, Professor Pat Pending, Penelope Pitstop, The Slag Brothers, and The Gruesome Twosome. There was also The Arkansas Chuggabug that rather confused me as one of the passengers was a big bear. How that would help them win I’m not sure, and it wouldn’t exceed several regulations as well? I doubt that was within the rules.

The best-known characters though were the duo of Dick Dastardly and his dog Muttley in The Mean Machine with the number 00. They had no problem with cheating, and they would do anything to try and gain an advantage and take first place. These plans always went wrong though, and they would end up being disqualified or finishing nowhere, at which point Muttley would simply laugh at their endless misfortune.

But they kept trying with these various plans even though they were always doomed to failure, with an almost Wile E Coyote-style attitude to constantly trying even though it was always going to be to their disadvantage and you wondered why they bothered. All of this was accompanied by some breathless commentary, and there were some very close finishes. Although there was no overall series champion declared, the car with the most podium finishes was The Slag Brothers. Well done them! 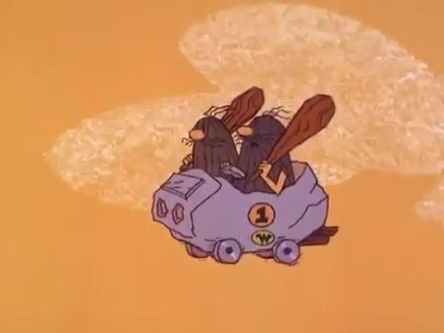 There were 17 episodes of Wacky Races, containing two races each, making 34. It was shown a lot on the BBC throughout the 70s and 80s, and it was still being shown into the 90s on Cartoon Network. The show was popular enough for there to be two spin-offs in the late-60s/early-70s. Firstly there was Dastardly And Muttley In Their Flying Machines (known for the “Stop The Pigeon” song). 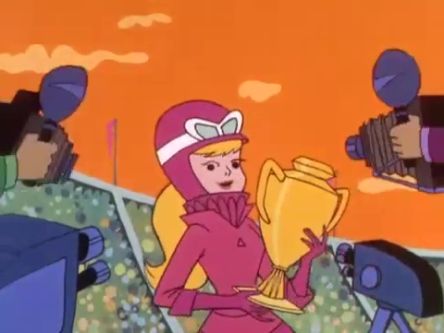 And there was also The Perils Of Penelope Pitstop (and even now when I see that name I still think of the show’s catchphrase “hay-elp!”). I remember watching both of these too, and there was also an advert based on Wacky Races that was on TV in the 90s for Eagle Star Direct. There have also been plenty of games. I think that all of the episodes have been released on DVD too, but I haven’t got round to buying that one.