This is another cartoon from the 90s that had a rather unusual idea, even when compared to Biker Mice From Mars. Earthworm Jim began as a series of computer games in 1994, I never played any of them myself, but I do remember that there was something of a buzz around them at the time for their amusing style. These games became popular enough for there to be a spin-off TV series.

This was another cartoon that contained a lot of action and adventure, with plenty of laughs thrown in too, and a memorable opening theme. One day an ordinary earthworm gets hold of a robotic suit, and it turns him to an unlikely superhero! As the episodes progress, a variety of strange enemies try and obtain the suit. These included Bob The Killer Goldfish, Queen Slug-For-A-Butt, and Professor Monkey-For-A-Head. All of them really did want to rule the galaxy, never mind just the world.

Also helping out Jim was his faithful (sometimes) sidekick Peter Puppy, and his love interest was Princess What’s-Her-Name. There were also a few running gags, including most episodes ending with a cow appearing out of nowhere and landing on someone (a famous feature from the game), and lots of bizarre cliffhangers, where you really didn’t know what was going to happen next. There was also a narrator who breathlessly tried to keep track of all of this for the viewers. When Jim saved the day, he would often say his catchphrase “groovy!”.

One of the good things about Earthworm Jim is that the main character was voiced by Dan Castellaneta, best known as Homer in The Simpsons (as I have said before, he has done a lot more cartoon voice work than I realised, and it’s always good to hear him), and there was plenty of other great voice talent contributing too. Looking back at the show now, it doesn’t take itself too seriously, and the surreal twists reminded me a little of Freakzoid!, another superhero spoof cartoon from around the same time. 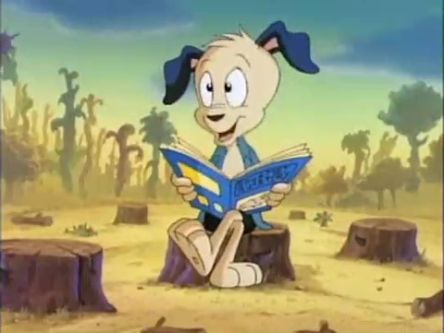 This is another cartoon that I remember watching in the late-90s that was a part of Channel 4’s weekend mornings strand, I don’t think it was ever shown on CBBC or CITV. There were 23 episodes of Earthworm Jim in two series, and a few were released on VHS in this country, but I don’t think that there have been any on DVD. Just like Super Mario Brothers, the change from game to cartoon was a success with lots of people including myself. There have been a few more games released since.