It’s time for another entry in the “were there any decent 90s ITV sitcoms?” series. Now I don’t plan to review every single sitcom that was on ITV in the 90s of course, as some of them really aren’t worth rediscovering, but this one has a rather interesting story behind it, and I have been able to find all of the episodes on YouTube, so here’s what it was about.

Richard Wilson had been working in TV for many years, before becoming a big success in One Foot In The Grave. After the fifth series had ended, and the sixth wasn’t yet in the works, Wilson took the opportunity to briefly leave the world of Victor Meldrew behind and star in a new sitcom. Duck Patrol was created by Jan Etherington and Gavin Petrie, who were also behind Second Thoughts (one of the few 90s ITV sitcoms that really could claim to have been a success), and its sequel Faith In The Future.

This meant there was definitely a buzz around this one, a popular actor starring in a show created by the team of a popular sitcom, it was much-promoted and even earned a TV Times cover in the week that it launched. All of the signs pointed to this being the next big thing (and unlike all the others that hadn’t delivered this one really was going to), and millions of viewers were guaranteed to be captivated by their antics, because it was going to be a hit, honest. Could it live up to all the hype?

Duck Patrol (an LWT Production for ITV) was set at the Ravensbeck river police station by the Thames. Wilson played “Prof” (all of the characters were known by their nicknames). He was nearing retirement and had spent a lot of time on the river, but the ducks usually caused more problems for him and his colleagues than any people. Also among the cast were a pre-Doctor Who David Tennant and Samantha Beckinsale. 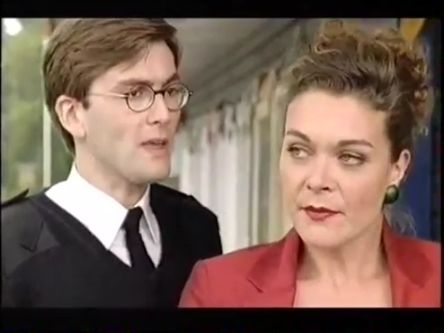 Duck Patrol was made on location with no laughter track, and was designed to be a gentle sitcom with nice scenery, but as one of the more exciting moments was Prof asking “where’s my red pen?”, you soon get the idea about was this one was going to be like. Also guest starring in one of the episodes was Josie Lawrence as a mermaid (I suppose you had to be there).

There were only seven episodes of Duck Patrol (or eight if you include the unaired pilot), and they were shown on Sunday evenings in the summer of 1998. After all the expectation, viewers and critics were rather indifferent to it. Despite the impressive cast, there simply weren’t enough amusing moments, and it failed to make a splash. There has been no DVD release and it has been long-since forgotten. Even this one becoming a flop was a big blow for ITV.