Yet another year is at an end, where does all the time go? In 2019 I have done 200 blog pieces (including this one), and of course I have enjoyed putting them together and sharing them on here. Firstly, my most viewed post that I did this year was Another Afternoon With CITV, when I looked back to some adverts from 1993. I thought I would conclude the year as I usually do, by sharing some of my highlights.

MUSIC. Well it’s very clear what the highlight is here. When I read that Siobhan and Marcella from Shakespear’s Sister had reconciled after 25 years I was very pleased, but I never expected it to go any further than that. But then this year they announced they had made some new songs, and videos were also made for “All The Queen’s Horses” and “When She Finds You”, which were definitely up to the standard of their 80s and 90s work. After appearing on the cover of Classic Pop, they then toured the UK. I didn’t go myself but it seems that it went well, and got some good reviews. Who could’ve seen this happening even a few years ago? I was so thrilled by it all I almost poked my eyes out with joy. I’m not sure what their next move is, but it’s so great that this story has the unlikeliest of happy endings.

Years ago, I liked the British Hit Singles And Albums books, that documented the ups and downs of pop music careers, but they stopped in 2006. This year, the series was revived, but now the books were published decade by decade. I got the 80s books as I wanted to discover more about music from that era, including also having a look at old magazines online. This led to me deciding to take a look back at The Belle Stars. I presumed that every act and song in the book had a story behind it, but I never considered that one I would the most interesting was for a group that spent only two weeks at the lower end of the singles chart in the 80s.

This all followed on from when I reviewed The Kid, a long-forgotten but enjoyable CBBC show from the mid-80s. This starred Steve Fairnie, who I discovered had also had a fascinating career in music from the mid-70s to the late-80s, including in 1982 the hit single “Falling In Love Again”, as one of the Techno Twins alongside his wife Bev Sage, who is also “Queen Of The Rapping Scene”. It was great to discover his music and his artwork. Also appearing in The Kid was Debbie Linden, and by chance I found her obituary newspaper report recently, so here’s a picture of her (on the left) from when she was a hostess on 3-2-1.

I also enjoyed looking back at CITV music show Hold Tight, which among others was hosted by Bob Carolgees, Peter Simon, and Barbie Wilde. Again, I didn’t know much about Barbie and wanted to discover more, and she also had an interesting career in the 80s, including appearing in horror films and releasing some singles (which also led to an appearance on Razzmatazz as part of the group Shock in 1982). She also appeared in a music video alongside Bev Sage, I never realised that their paths crossed, that was a good coincidence. And after seeing the video for her great single “Phantom Lady”, it made me realise that I seem to be rather fond of blue-haired women from the 80s, which isn’t specific or odd at all is it, make of that what you will.

CBBC/CITV. Recently I thought I’d review some more children’s shows. These included plenty of animations like Fireman Sam and Postman Pat. I also enjoyed reviewing some CITV shows from the 80s including Do it, How Dare You!, and Palace Hill, they were lots of fun. And my review of WYSIWYG got a positive response from some who actually appeared in the show, so I was very pleased about that.

GAME SHOWS. As I think you’ve noticed, I do like game shows. I reviewed lots more, including some shown on Sky, and original American versions of shows that would later come to the UK. I also enjoyed discovering Murphy’s Micro Quiz-M from Ireland. I don’t have many left to review now though.

COMEDY. I reviewed a few more shows from my comedy DVD collection, including Home To Roost. I was particularity amused by the episode from 1985 where Matthew dated a young Siouxsie lookalike called Christine (I then realised that Siouxsie had a hit single in 1980 called “Christine”, coincidence or not?). In more recent years, Jenna Russell who played Christine appeared in EastEnders, and this year she was on a musical theatre special of Pointless Celebrities, where she made the final and won! It was also good to track down the complete ill-fated Hardwicke House online. Lots more sitcom reviews to come. 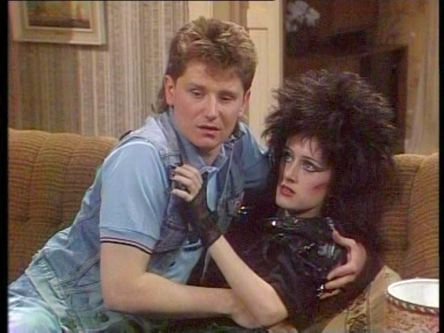 OTHERS. I also enjoyed reviewing other old TV shows from over the years including America’s Top Ten, The Magic Comedy Strip, The National Lottery Live, and The Ronn Lucas Show. Anything else I can find that I think is worth featuring whether it’s adverts, music shows, soaps or anything else, will be considered.

My blog has had almost 55,000 views this year which is great. There is plenty more planned to come, including a 5th anniversary special in January. I’m sure I’ll keep thinking of ideas for pieces for a while yet. To everyone who has visited, and especially to those who have liked and commented, wherever you are, thank you for your support, it does mean a lot to me. Happy New Year to all of you, and I hope you’ll join me for more classic TV memories soon.