This is a comedy-drama show that was regularly on CITV in the mid-90s, and it featured some puppetry. I always thought that the design of the characters looked a little similar to the ones in Roger And The Rottentrolls, another CITV show from around the same time (that I reviewed recently), but after finding out a little more about the show, I discovered that it is more closely linked to the 80s show Button Moon.

If The Spooks Of Bottle Bay aimed to be a spooky show, then I think it definitely achieved that. First of all, it seems that the location of the show was inside a bottle that was on a mantelpiece in a house, how did they all fit in there. The main character was the terrifically named Sidney Sludge. Now he was rather well-meaning, but the same couldn’t be said for his scheming sister Sybil (who had orange hair and green skin?!) and his brother Cedric. Sidney also had a pet bulldog called Max. 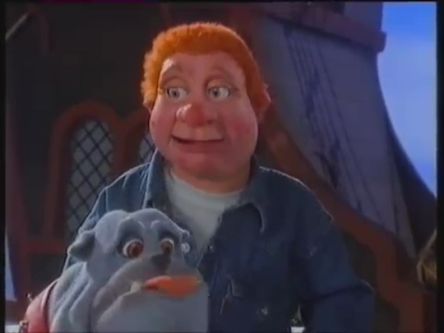 Sidney also lives in a beach hut (before he moved to a guesthouse), and he likes to spend a lot of time in fish and chip shop The Happy Plaice run by Bella. When Sybil and Cedric try to come up with a plan, the spooks often had to come to the rescue, but they only came out late at night. The main spooks in the series were the family consisting of the father Fred, mother Sally, and a baby. But there were plenty of other spooks who appeared beyond them.

Now I don’t know if it was intentional or not, but one of the spooks in the show really was rather horrible looking. This was Tommy, who wore a red hat, had big teeth, and some rather wonky eyes. Honestly, what were they thinking when they came up with that one? Gave me the fright of my life. Later episodes would also end with Sidney saying “now that’s spooky”.

The Spooks Of Bottle Bay ran for three series with 15-minute episodes. I’m fairly sure that most of them were shown on Fridays, as I do remember watching while thinking about what I would do for the weekend (oh yes, I had a thrilling childhood). There were 39 episodes made, and some of them were released on VHS, although I didn’t have any of these, and it seems that it hasn’t been repeated on any channel in more recent years, but it was another creative and enjoyable show.