This is a game show that really did have multi-player potential, as not only did the contestants in the studio play along, but the viewers at home across the country could also have a go thanks to several interactive ways. If you’ve ever wanted to prove that you really are clever or have a good general knowledge, then this was the game to take part in.

Test The Nation was hosted by Anne Robinson (who wasn’t as harsh as on The Weakest Link, but still came across as authoritative) and Phillip Schofield (the much cheerier of the two, although it’s not that hard really). There would be several tests, on things such as IQ, news, sport, history, entertainment, and so on. There would be around 65 multiple-choice questions that had to be answered against the clock.

Now this could be done in several ways, such as using the TV remote control, the website, text messages, or just plain old pencil and paper. In the studio, the contestants were split into various groups, such as by occupation or by hair colour, along with a group of celebrities also taking part. It was Anne’s job to ask the questions, and Phillip interviewed the contestants, all of whom were very determined to get the highest score.

Test The Nation would be in two parts. The first would feature the questions being asked, and after a short break, the second would reveal the answers (which would take just about as long). Although if you were playing using the TV or website, your score would be calculated for you. As this was a rather interesting idea, I do remember playing along on a few occasions, hopefully I could prove that I knew something. 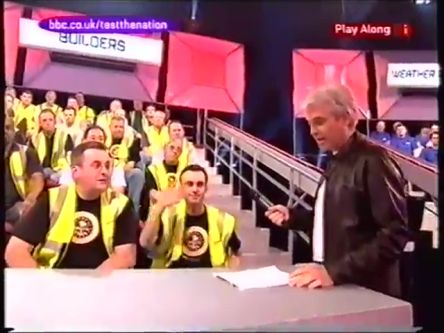 Once the results were in, they would be compared, with not only which team in the studio got the highest score being revealed, but also which city, which age group, and so on. It could be argued though that the analysis of all this didn’t really reveal a huge amount about people and their knowledge, it definitely added a competitive edge to it, and although there were no prizes on offer, to know that you had done well was satisfying enough.

Every edition of Test The Nation was shown live and seemed to go on for hours, it was a creative way to fill a Saturday Night schedule though. There were 17 editions made over five years, and as it was an occasional series, it was an idea that didn’t become too repetitive or outstay its welcome (Danny Wallace co-hosted the later editions after Phillip went off to ITV). The show also did well enough for there to be some merchandise be released, including a book and an interactive DVD game, although I didn’t have either of those.