This is a sitcom that was shown on CBBC in the mid-90s, and it was a rather ridiculous idea, even when compared to the other rather unusual sitcoms that were on CBBC around the same time including The Boot Street Band and Pirates (and I plan to review both of those soon too). Julia Jekyll And Harriet Hyde definitely was a show that you had to take notice of though, as it was rather loud and fast-moving.

Julia Jekyll (Olivia Hallinan) is the cleverest pupil at her school, the Rocket Academy. Her teacher is Memphis Rocket, a hippy figure who runs the school along with his mother who just won’t leave him alone. Julia is so clever the most of the pupils are rather jealous of her, especially the bullies, Sharon and Nicola Blister (or The Blister Sisters as they are known, ooh, that rhymes). Their scheming uncle Lester is one of the teachers too. 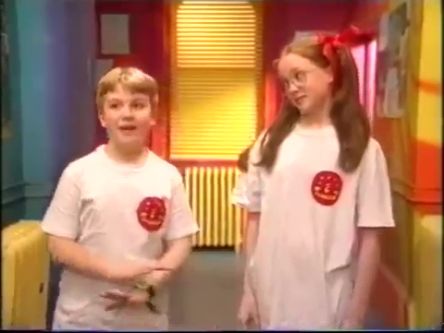 One day whilst in a science lesson, the sisters put all kind of strange things into a potion that Julia is working on without her noticing. When Julia drinks this, she is transformed into the monster Harriet Hyde! Nobody realises that Julia and Harriet (a big puppet thing with ginger hair) are the same person (except for her amusingly-named friend Edward Knickers), which is a surprise as she can seem to transform between the two unexpectedly at any time, causing chaos with everyone, including her parents and next-door neighbours. Repeat for 53 episodes. 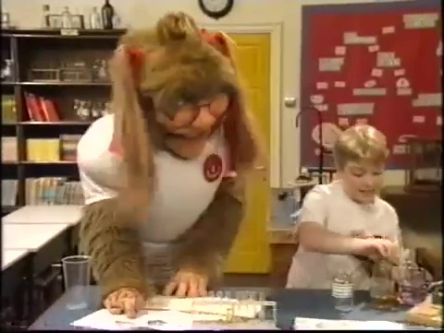 Well that may seem a little harsh, but that was where the main laughs in the show came from. Even though every episode was only 15 minutes long, there were a lot of bizarre moments, and it definitely fulfilled its quota of lots of running around and amusing misunderstandings. I do remember watching some episodes at the time and thinking they were rather far-fetched (but in a good way). 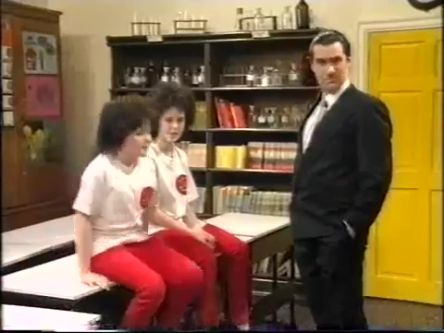 Julia Jekyll and Harriet Hyde ran for three series, and it was also repeated in the early days of the CBBC Channel in 2002 and 2003. As far as I know, it’s yet another CBBC series that hasn’t had a DVD release, but I think that plenty of people would welcome one. It is also notable that Olivia Hallinan went on to have further success as an actress in more recent years, making her one of the few cast members whose TV acting careers didn’t end at about the age of 12.