This is another show that does feature a game show element, although again I do feel that it is more of a general entertainment show. Ant and Dec had already hosted some Saturday Night TV shows, including BBC1’s Friends Like These. They then moved to ITV and hosted Slap Bang which was something of a flop. But they went off and regrouped and came back with something that was much better… and this time it was a hit!

In the early-2000s Ant and Dec had hosted various other successful shows including Pop Idol, but critics often said that these formats were popular enough that they would’ve done well in the ratings whoever hosted them, so they had to prove that they did have the ability to be a success with their own show. It turned out to be something in the familiar Noel’s House Party/Don’t Forget Your Toothbrush style.

Saturday Night Takeaway was a live show that contained lots of features. I only really watched the first few series regularly, and these are some of the highlights from that era. One memorable feature was Make Ant Laugh. Ant is supposedly rather grumpy, and needs cheering up (“laugh? Don’t make me laugh!”). A rather bad variety act would come on and had to make Ant laugh within 60 seconds. If they succeeded, they won a prize, and I remember Ant did end up giggling a lot.

There was also What’s Next, where Ant and Dec didn’t know what the next feature they were taking part in was until a curtain was raised (eventually), so it was always a surprise. Other features over the series have included Ant Vs Dec, The Jiggy Bank, Home Run and Little Ant And Dec. It’s fair to say by this point that our cheeky hosts had left their pop music careers (which they weren’t embarrassed about at all, oh no) behind. 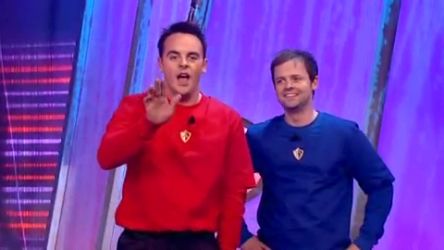 One of the more interesting features in the first series was Banged Up With Beadle. TV presenter Jeremy Beadle has been locked away in a dungeon “for his services to light entertainment”. Every week he would be paired with a contestant and they would have to practice a task, which they would then have to perform live on the show. If they succeeded, the contestant won a prize, and Jeremy was given something extra to make his time a little more enjoyable, like some books. There was also a spin-off show on ITV2 which looked at some of the highlights of the week, along with the contestant talking about their experience. Jeremy always came across as very kind and did anything he could to help out the contestants, which was great.

The centrepiece of the show was Grab The Ads, leading to the show’s main catchphrase “don’t just watch the ads… win them!”. Some adverts were picked from a show that had been on ITV1 during the week, and one rather overexcited contestant was chosen to play. There were 60 seconds, and for every correct answer, one of the 25 items was randomly highlighted. The twist here was that this meant that they could win a car and a holiday, or a toilet roll and a chocolate bar. However, they could gamble to answer one more question and if they got it right they would win everything on the board. 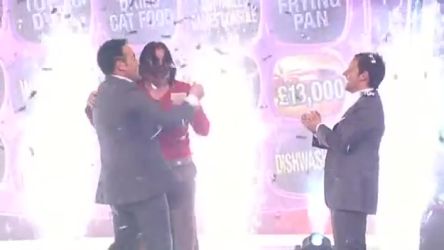 Overall, Saturday Night Takeaway was a big success with viewers, Ant and Dec had finally done it! In 2009 the show ended and they went off to other things including game show Push The Button, but this was a flop by comparison. In 2013 the format was revived, and seemed to have a fresh energy, including more new features such as In For A Penny. There has also been a tour, along with a book and a board game being released, and the show’s success is one of the factors leading to Ant and Dec winning the Most Popular TV Presenter award for about 43 consecutive years.