This is another cartoon that was shown regularly on CBBC throughout the 80s. Each edition was only about five minutes long though, so there isn’t a huge amount to say about it, but as it was another show that I do remember watching, I feel that it’s definitely worth featuring here. Jimbo And The Jet Set was a cartoon that was all about a cheery (most of the time) small talking jet plane.

Jimbo was based at London Airport and he would fly around the world and often get into a mishap. The other characters included Timmy Tow-Truck, Claude Catering, Sammy Steps and Harry Helicopter. They really did like their alliteration. The character that I remember the most though was the rather short-tempered chief airport commander who had such a big ginger moustache that you could barely see his mouth, and he would often conclude episodes by saying “I want words with you, Jimbo!”. 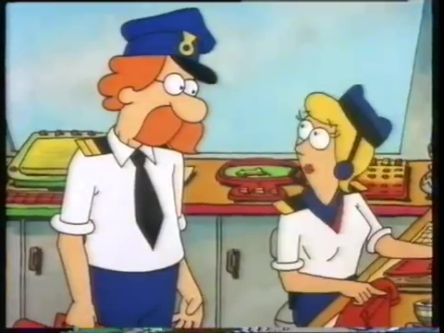 I was surprised to discover that there were only 25 editions of Jimbo And The Jet Set made, it seemed like a lot more, although this was probably because it was repeated rather frequently, and it was shown on CBBC as late as 1992. Indeed, it must have become rather popular with viewers, because for a short while in the late-80s a comic strip featuring Jimbo’s adventures appeared on the children’s page of Radio Times.

Another notable thing about the show was that all of the voices were provided by just two people (including Susan Sheridan, which explains why Jimbo has the same voice as Noddy from the 90s revival), and it seems that episodes were repeated on Nickelodeon too. The animation also looks rather scruffy compared to what can be achieved now, but it definitely meant that there was a distinctive look.

A lot of the Jimbo And The Jet Set episodes were also released on VHS. I know that I say it a lot, but it does constantly surprise me how so many 80s and 90s children’s TV shows were released on VHS, yet barely any have been released on DVD by comparison. I’ve no doubt that there’s the market out there. I would definitely buy them, as I’m sure would many others who want to preserve their memories of these shows.

The team behind Jimbo And The Jet Set also created the CBBC cartoons The Family Ness and Penny Crayon, I also watched both of those and I plan to review them too. I was also reminded that a while later, CITV launched the similar cartoon Budgie The Little Helicopter, but this will always be my favourite one of the surprisingly crowded market of children’s cartoons featuring talking aircraft.