Ant and Dec have now been TV presenters for 25 years. After leaving Byker Grove, their earliest shows included CBBC’s The Ant And Dec Show and BBC1 game show Friends Like These (although I don’t plan to review either of those). In the 90s they also did Ant And Dec Unzipped, a comedy show on Channel 4. I did review this one a while back, but it wasn’t their biggest success.

Something that did much better was their CITV Saturday Morning show SM:TV Live, and after they left they had another attempt at hosting a primetime show. This was Slap Bang, an hour-long Saturday Night show that would include fun games and sketches which was “slap bang in the middle of your weekend”. There was a lot of effort put into the regular features, in the familiar “let’s throw lots of ideas at the viewers and hope that some of them will stick”-style that was also used by Noel’s House Party.

But how many of these ideas would become popular? Indeed, how many of them would last to the end of the series? Would viewers become fond of the show and what was on offer? Features included Formula 6½, where children would go around a track in go-karts, that was presented in the style of ITV’s breathless coverage of Formula 1 racing at the time.

Loose Change Lottery was where before the show all of the studio audience members put their change into a pot and were given a number, and then there would be a draw, with the number pulled out winning all the money in the pot. Beers was a parody of corny American sitcoms that was set in a pub featuring some guest celebrity appearances and it was very similar to Chums from SM:TV Live. 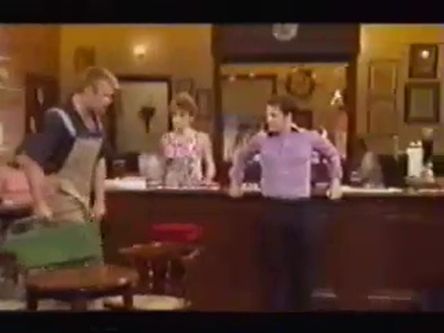 Cher And Cher Alike was where contestants had to guess which hairstyle belonged to pop star Cher, although they ran out of these before the end of the series. At Home With The Stars was another celebrity feature. Donnelly was where Dec tried to interview a guest but he was always being hampered by Ant. And Challenge Ant was another recycled feature from SM:TV Live, although the difference was that Ant played against adult contestants instead of child ones and there were lots of prizes on offer. And who knows, a pop star could run on stage for no reason!

Slap Bang was another lively entertainment show where the studio audience all seemed to be having a good time, but it was unclear whether viewers at home would feel the same way. Its performance was rather average, and surprisingly there was only one series. Had Ant and Dec blown their chance of hosting a long-running show on ITV? Well, no actually, because about a year later the similar Saturday Night Takeaway launched and they never looked back really, finally becoming primetime stars like many hoped they would.