A while ago I did a blog piece looking back at the history of night-time programming on ITV. After having a look on YouTube, I thought that I might review one of the segments that I don’t remember from the time in a little more detail. In August 1987 Night Network was launched, which featured various hosts and was split into segments about 15-20 minutes long on music, film, and so on.

It was an attempt to replicate the feel of a Saturday Morning children’s TV show, but aimed at slightly older viewers, which ran from 1-3am instead of 9-11am, a sort-of cross between Network 7 and Going Live! Night Network was only shown at weekends, originally in the LWT, Anglia, and TVS regions. While trendy LWT viewers might have enjoyed it, its fast-moving format might have been something of a culture shock to the Anglia region where they were still using the rusty old silver knight as their symbol. In no particular order, here’s a look at some of the regular segments. 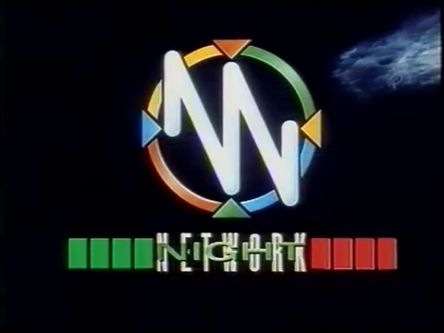 The Bunker Show was where Rowland Rivron would interview celebrities about their life. Video View with Mick Brown (who was also a presenter on Capital Radio at this time) featured rock and pop stars who were invited to offer their unflinching views on the latest hit singles which was always entertaining. Brown also hosted a segment called MBTV. 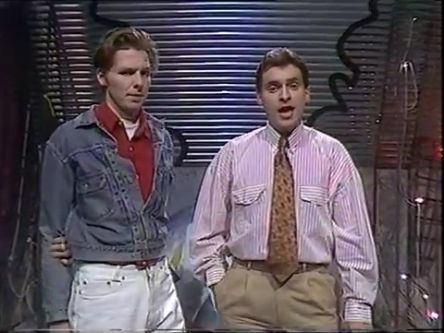 Pillow Talk was hosted by pyjama wearing-Emma Freud who would interview a celebrity in bed. Chart Attack was another segment that looked at the latest pop music news. Talk Talk with Paul Thompson was another interview segment, and sometimes it could get a little strange. I guess you had to be there. Thompson also hosted a segment called Street Cred.

Press Gang featured a journalist’s review of the latest music magazines. Leee’s Place was where Imagination singer Leee John would interview a celebrity in a nightclub. The N-Sign Radio with Tim Westwood featured hip-hop and rap music, with some acts having some of their earliest exposure in this country. There was even a game show segment with The All-New Alphabet Game. Nicholas Parsons hosted as two teams of two played word games.

Small Screen featured film and VHS reviews with Barbie Wilde. Now Barbie also hosted the final series of Hold Tight (that I reviewed recently). I must admit that I didn’t know much about her, so I decided to find out more, and I was fascinated. Canadian-born Barbie had a rather unusual double career in the 80s, being an actress in horror films around the same time she was appearing on CITV. She must be the only person to have both Hellraiser II and The Sooty Show on her CV.

Along with all this, there were also repeats of cult shows including Batman, Captain Scarlet, and The Partridge Family, plus competitions, music videos, and pop concerts. Night Network eventually extended to more ITV regions (but it was not shown on Central who did its own thing), and by the end its hours were reduced a little as all ITV regions had gone 24 hours by this point and were starting to try out different shows, meaning Night Network came to an end in March 1989 after 1½ enjoyable years.