There have been a lot of comedy panel games over the years, most of them based around one topic. But for every success such as Have I Got News For You or They Think It’s All Over, there are also long-forgotten flops including The Best Show In The World… Probably (all about advertising) and Not A Lot Of People Know That (goodness knows). This was one of the better ones.

It’s Only TV… But I Like It was all about classic television. It was hosted by Jonathan Ross in his usual cheeky style, and the team captains were Julian Clary and Jack Dee (replaced in the second series by Phill Jupitus in his ongoing quest to appear on every comedy panel game ever and laugh too loudly at everything). Every week they would be joined by two panellists who were familiar TV faces from throughout the decades.

The opening sequence and set design of the show were for some reason based around The Test Card, something that may be a familiar image but was never a TV show as such, oh no. There were various rounds that were played over the series, and the archive was raided for some rather unusual clips (although most of them seemed to have already appeared on Room 101).

The rounds included spotting the connection between three shows, an awkward moment in a children’s TV show where you would have to guess what happened next, a look back at contestants on talent shows and guessing who was the most successful, and old people describing various TV shows and personalities, with the teams scoring more points the sooner they guessed what or who it was. 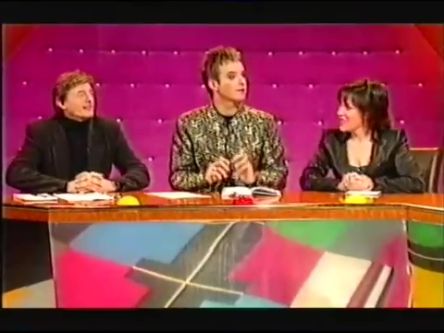 Also featuring was a round where the captain got their remote control out and had to guess five shows from being shown props by the other panellists, and a rather odd one where they would wear masks of famous TV characters and then they would have to guess what show they appeared in by asking the opposing team various questions. The final round was usually about having to complete famous quotes or catchphrases against the clock, so get ready with your finger on the buzzer.

It’s Only TV… But I Like It ran for four series and overall it was good fun, with lots of strange TV trivia discussed which was nice. Also around this time on BBC1 there was a more straightforward panel game called A Question Of TV that also looked back at classic TV moments (based on the rules of A Question Of Sport), and I shall try and review that soon too.