Just like there was a strand on ITV for shows aimed at younger viewers earlier in the day separate from the main CITV afternoon strand, there was also the equivalent on the BBC, and in the 80s this strand was known as See-Saw. One of the most memorable shows in this strand that aimed to make learning fun was Chockablock, which was originally shown in 1981.

One notable thing about Chockablock was that it had two hosts who alternated, Fred Harris (Chockabloke) and Carol Leader (Chockagirl) who both had plenty of experience in children’s TV. Harris also hosted other shows including Play School along with plenty of shows about computing, and he even turned up in ITV’s comedy sketch show End Of Part One. Remember that Fred is an artist who doesn’t like to work with amateurs.

Every edition would begin with the host arriving in the buggy accompanied by the funky electronic theme music and then checking in. Chockablock featured a big machine that had plenty of flashing lights, big buttons, a TV screen, a non-working clock and a tape recorder. It looks like it had about one byte of memory which was a lot in those days. The host would then insert a block from the block stock (trying not to knock them all over). 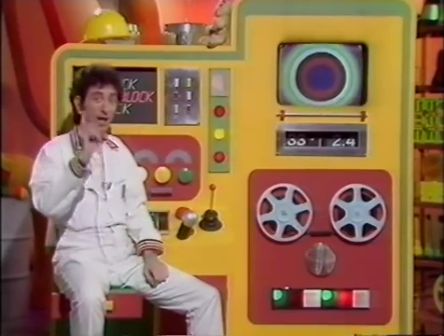 There would then be a sequence where various pictures would appear on the screen and the host would have to determine if they rhymed, along with some strange noises to indicate if they were right or not. They would also sing a nursery rhyme (accompanied by some illustrations) and viewers were asked to fill in the gaps with the words that rhymed as the tape recorder was rather unreliable.

Another feature was Rockablock, which consisted of two segments that the host spun round until they could find the pictures that were words that rhymed. As this was a show that was presumably fairly short on money and time, the “make do and mend” attitude that had to be applied in those days came in useful when in one edition the wheel started to squeak loudly and Fred just carried on by saying (presumably an ad-lib) “er… I think the wheel needs some oil”. That’s the spirit!

There were then be another song which would contain a lot of the words that had been featured in that edition, and it was a real chance for the host to show off their singing skills. Then that would be it, the host would check out, put their hardhat on, get back in their buggy and drive off. The show would then end with a shot of all the lights still flashing in the now empty studio which I always found a little eerie. Come back! 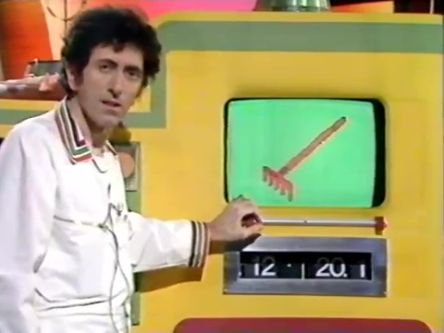 Every edition of Chockablock was 15 minutes long, it was repeated regularly in the See-Saw slot on BBC1 and BBC2 until as late as 1989, and I’m fairly sure that I saw some of the editions in the latter repeat runs which entertained me in my younger days. Unfortunately, it is rumoured that not long after the repeat run ended some of the editions were wiped. That’s not nice is it.