Now I know that this is from only last month so it’s not very nostalgic, and another Christmas has now come and gone, but it was such a terrific TV moment that I just had to do a piece on it. It’s yet another celebrity edition of game show Pointless, hosted by Alexander Armstrong and Richard Osman, where you are rewarded for your knowledge that would be useless to you in just about any other situation, and they’ve put up the tree specially.

The four celebrity teams taking part are Dave Hill and Rob Davis, Roger McGough and Sally Lindsay, Jamelia and Sonia, and the reason that I am doing this piece, Sara Dallin and Keren Woodward of Bananarama fame, making their first appearance on the show since November 2013 when they made the final but missed out on the jackpot by just one point, something that clearly still haunts them all these years later. Can they go one better this time?

I should also point out that Brix Smith who featured in a piece that I did a while back when I found a picture of her in a pub very close to where I live in Bethnal Green alongside none other than Miss Siobhan Fahey that got me very excited appeared on Pointless Celebrities in April 2016 as part of a fashion-themed edition, but she got knocked out in the second round and didn’t win, oh dear. Today’s jackpot is £2,500.

The first round is about cities in the show, can you identify these places at wintertime. Sara and Keren go through with a score of 88, the lowest in the round, and Dave and Rob are knocked out. Next is festive music, synonyms of Christmas carols to be precise. After a couple of good answers Sara and Keren progress with a score of 40 (again the lowest score in the round), and Roger and Sally are knocked out. 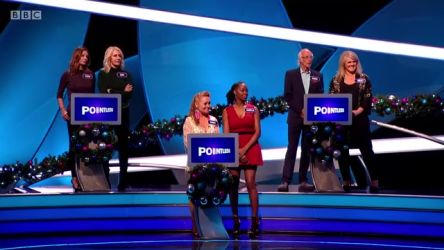 The next round is Sara and Keren v Jamelia and Sonia (something of a surprise considering how useless Jamelia was on ITV’s Tipping Point: Lucky Stars recently). First up, pictures of famous people with Father Christmas. Sara and Keren win this 41-65. Second is members of Monty Python, and as Sara and Keren win this 22-96, they don’t even need to go to the third question and they are into the final again and maintain their unbeaten record!

For making the final, they win a Pointless trophy! I presume they would already have one from last time, maybe they could give this one to a friend or just throw it in the bin. They choose the category Things Inbetween. They make their choices on countries alphabetically between the Marshall Islands and the Solomon Islands, and go for Rwanda, Papua New Guinea and Samoa. They could be in with a chance here!

Rwanda scores four points, and Papua New Guinea scores one. This is their last chance with Samoa. And this time, well look at that, they go all the way and get their Pointless answer and they have won £2,500 for charity, congratulations! That really is terrific. And just when you thought that it couldn’t get any more exciting, the show closes with a song from Alexander. 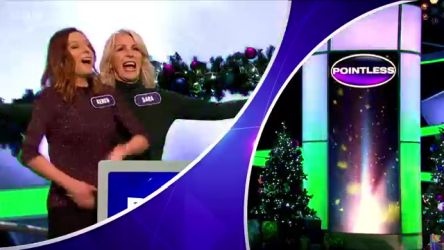 It seems that Sara and Keren really do know their stuff, and just when I thought that they couldn’t be any more terrific they start winning game shows. And they must enjoy it as they have appeared on another one since in January 2019, this time on BBC2’s Celebrity Antiques Road Trip where again they were very entertaining. Maybe it could be a new career for them if their next album flops.