I’ve never really been a huge fan of magic shows on TV over the years, but this is one that I remember watching as it featured a mixture of magic along with some comedy routines. The Magic Comedy Strip was shown on ITV in 1992, around the time of the last gasp of old-style variety shows, there wouldn’t really be room on TV for anything like this not long after.

Following a nice animated opening sequence, we were introduced to the regular group of performers who would take part every week. These were Rudy Coby, an American who could do some rather unusual things with his arms and legs, American David Williamson who would often do clever card tricks, and Jeff Hobson, another American who would often involve studio audience members in his tricks and stunts. Also regularly appearing were the illusionist double-act the Pendragons who usually did some dazzling things, along with a few guest acts from around the world.

The highlight of The Magic Comedy Strip for me though was the regular appearances by Joe Pasquale. This was the first time that I can remember seeing him on TV, and I know that people can find his style rather irritating, but yes, I thought that he was funny. I was eight years old at the time, alright? He had a rather strange voice (“I know a song that will get on your nerves…“) and he could do some silly tricks. And of course he went on to further success including a comedy show with Bradley Walsh and hosting a revival of classic game show The Price Is Right on ITV.

Although it was fun I’m fairly sure that The Magic Comedy Strip ran for only six editions and it hasn’t been seen since (it doesn’t even have a Wikipedia entry), with the exception of one of Joe Pasquale’s routines turning up in the final programme shown on Thames in 1992, and a few outtake shows also featured one of David Williamson’s card tricks going wrong. He learnt never to work with children or animals the hard way. 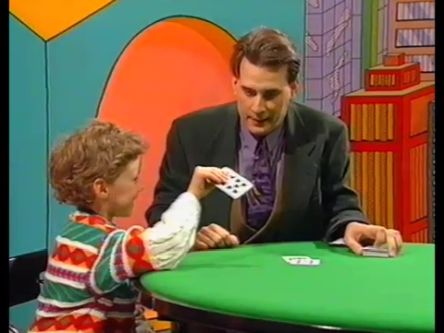 Another reason The Magic Comedy Strip might not have returned was because it was shown at 7pm on ITV, a weekday slot which will seemingly feature nothing else but Emmerdale until the end of time, so no other type of show can ever be tried out there now, but there were some talented people taking part and it certainly made Monday evenings more lively while it lasted.