Here’s a look back at yet another CBBC sitcom, and this one endured more than most. Bodger And Badger centred around a rather unusual double-act. There was the odd-job man Simon Bodger (Andy Cunningham, who also created the show and wrote the majority of the episodes) who was accompanied by a puppet badger (voiced by Cunningham thanks to some ventriloquism). They first appeared on CBBC’s Saturday Morning show On The Waterfront in 1988 before the got their own series in 1989.

And as always happens in these shows of course, there are some very odd situations. But for some reason, Badger was really rather fond of mashed potato, and it would often go everywhere. Bodger And Badger and for nine series, and the situation often changed. In the first series, Bodger worked in a restaurant, and from the second series, in a school, and he often had to hide the fact that he had a talking badger along with him, as he could have found that rather difficult to explain to people. 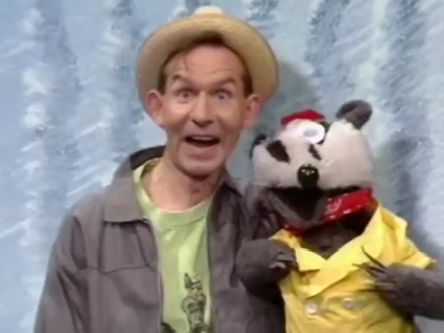 By the fifth series a new regular character was introduced, a small puppet mouse called Mousey who would often interact with Badger. By the ninth and final series, Bodger was running a B & B by the seaside, and most episodes seemed to climax with Bodger getting covered in mashed potato, but it still seemed to be funny every time. Other regular characters who got caught up in all of this throughout the years included Mr Troff, Mrs Trout and Mrs Bobbins.

Bodger And Badger eventually ran for 125 episodes that were 15 minutes long over almost a decade (the only sitcom to run for longer on CBBC was ChuckleVision), and it became one of the more popular CBBC comedy shows of its era. The show gained a lot of fans of all ages but there are still no plans for a DVD release, many people still hope that there will be one eventually. I’d definitely buy it. 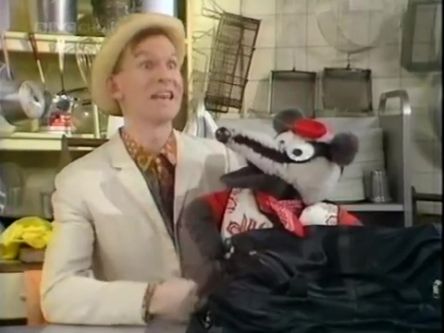 Bodger And Badger was also frequently repeated, including being shown as part of the CBBC On Choice strand (which I always enjoyed watching), and it was also on repeated on BBC2, the CBBC Channel and CBeebies for many years after the final episode in 1999. Indeed, after the show left the screen the characters still had a big enough following for the show to be toured across the country (and one of these shows has been released on DVD), and Cunningham continued to perform at various events up until his death a couple of years ago.