You should know by now that a long time ago I used to enjoy watching Peter Simon on Bid TV, not necessarily because I wanted to buy anything, but because he could be somewhat unpredictable and his suddenly going off-message could be rather amusing. And this is one of those moments where it really did seem like no-one knew what was going to happen next.

When Bid-Up started using a falling prices format like Price-Drop around 2005 (causing them to drop the “Up” from their name), I was rather disappointed that there would be no more live auctions. I was interested though in seeing how Peter would deal with falling prices. I remember on a few occasions he did get rather overexcited by the price going down, but this is one occasion where for some reason he couldn’t believe it, I think he might have been at the chocolate biscuits again.

One Friday night Peter was selling a watch which featured the branding of lifestyle magazine FHM and the price started at £100, he really does love his timepieces, but he began with a story. “Me sun, snowdrop just popped up Tuesday. And I was playing with a little Labrador Wednesday. And the garden gnome fell in the pond Thursday. I nearly went in after it. Then somebody said you had to do mouth-to-mouth, I went hrrf, no. Right”.

Then when there was an Auction Avalanche taking the price down, Peter didn’t seem to notice that it had happened, and he then suddenly yelled “what?! 17 quid? 17 quid!”, before yelling “just grab it!” and informing us that he’d bankrupt the company, let’s just hope that the Managing Director Arty Farquarson-Smythe wasn’t sat at ‘ome watching all this, it would’ve definitely put him off his supper. “It’s everything you could want from a design brand watch!”.

Then, as the price fell further, Peter became even more surprised. When it went to £15, he said “three fivers!”. He then had a go at his director “who knows what she’s saying, what?”, and insisting “they’re in a world of their own in that box down there, you should see them”. When it went to £14, he said “Oh! You can’t buy these for £14!”. And when it went to £13, Peter did a double take where he calmly said the price and then realised what had happened. £13! 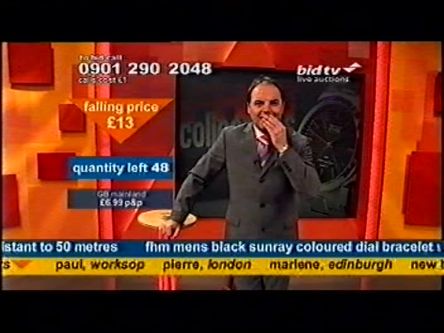 Peter then seemed to be somewhat lost for words by this point (rather rare for him), and he was reduced to mumbling “I can’t beli… I… I don’t know what to…”, before yelling “stop that bloody… stop that music! Doesn’t it get on yer nerves, honestly, day and night, der-der der-der der-der” (this reminds me of another time when Peter amusingly spoke out of turn when he looked right into the camera and said “Stop the music! Doesn’t it get on your nerves? They’re all looking at me now going ‘you can’t say that’. well I just did!”). 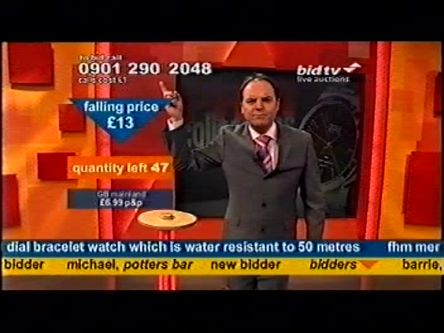 Trying to get his breath back, Peter then told us “Wherever you’re watching in the United Kingdom tonight, this is remarkable, you can not get this watch for £13”. Peter simply ended by saying “chew on a carrot, rub me leg, tell me that it’s Friday, on we go”, and concluding that if the prices stayed that low all night they might as well shut down. Well give it a few years… 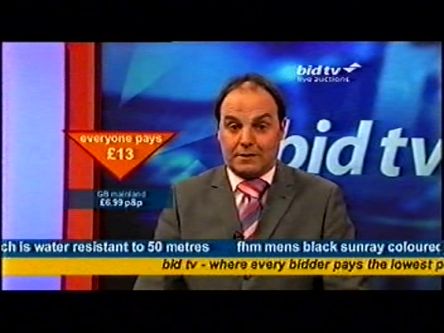