When Channel 5 launched in March 1997, they brought out their big hitters for their opening night schedule that they hoped would attract a large amount of viewers and give a taste of what was to come. These included the first episodes of what they hoped would be successful long-running shows like soap Family Affairs and, er, The Jack Docherty Show. Also featuring was a sitcom that I have wanted to see again for a while, and recently it turned up YouTube, so credit goes to “GMTV GOLD” for making it possible for me to do this review.

Hospital! was a one-off hour-long sitcom written by Laurie Rowley that simply attempted to fit in as many silly jokes as possible in a similar style to The Naked Gun films which made sure that you’ll never look at shows like Casualty in the same way again. Among the main cast were Hywel Bennett and Mark Heap who it is always great seeing (long before he played a similarly oh-so-crazy doctor in Channel 4’s sitcom Green Wing). 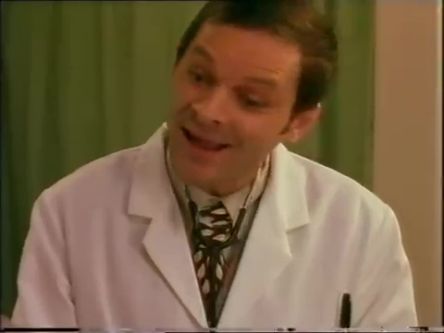 Also making very brief appearances and seemingly being happy to send themselves up somewhat were Clive Anderson, Julian Clary, Martin Clunes, Nicholas Parsons, Philip Pope, Alexei Sayle, and many others. This is a very bizarre hospital to say the least, with exploding patients being just an everyday occurrence, and it is in danger of being closed down. The team need to work their hardest to save the day. Thankfully, at the last moment terrific brain surgeon Dr Nightingale comes to the rescue. There were definitely some amusingly odd moments as the excitement unfolded. 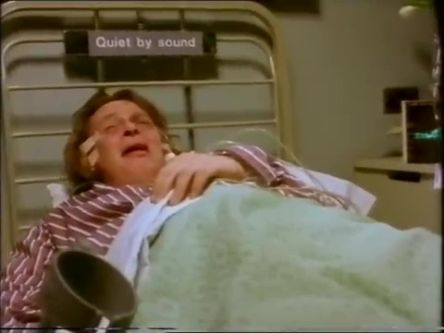 Hospital! has been released on VHS, but not on DVD, and there is little about it online. Having this ambitious sitcom as part of Channel 5’s opening night lineup was presumably to show the intention of their commitment to comedy, but the amount of home-grown shows in their 22-year history is barely in double figures (one of them being sketch show We Know Where You Live that I reviewed a while back). In more recent years there has been a reliance on imported sitcoms, and now that just seems to consist of endlessly repeating Friends. 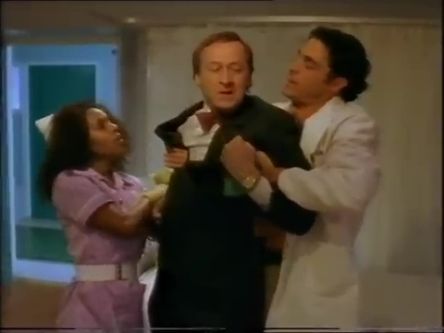 However, in 2001 there was 90-minute sequel by the same writer called Hotel! which had similarly surreal situations, and featured a rather impressive cast who have gone on to further success including Lysette Anthony, Peter Capaldi, Brian Conley, Keeley Hawes, Paul McGann and Bradley Walsh. It was shown on Channel 5 after being on the shelf for a while though (this is also online and I might review it soon too). I do wish that they had commissioned more shows like this, it does seem to be something of a missed opportunity really.