If you’re a regular to this blog you will know that recently I have been reviewing some of the lesser-remembered sitcoms that were on ITV in the 90s, and now for a change, here’s a look back at a BBC one. This is a sitcom that I don’t really remember watching at all at the time, and the story behind how I ended up deciding that it was worthy of featuring here is rather unusual.

Here’s some insight into what I get up to on Twitter. I often like to share pictures of old TV shows, mostly sitcoms, in the hope that other people will say that like me they remember these shows and enjoyed them. Most of the pictures are sourced from Inside Soap, which was a fortnightly magazine from 1995-2003. It mostly concentrated on soaps of course, but every issue also featured a double-page spread of other TV highlights coming over the fortnight.

I had uploaded just about all of the pieces on sitcoms that I remember from this period to a good response. Then, as I was beginning to run out, I thought that I would upload a picture of a sitcom that I didn’t remember, and I don’t usually say it but in this case I thought that I would ask if anyone remembered watching this show, as I presume someone out there must have, and I was rather surprised by the response.

I received a tweet from someone saying that they definitely did remember the show… as they were in it! I wasn’t expecting that at all, the sitcom was called The Last Salute and the reply was by someone called Brett Fancy who appeared in the first series (this leads on to another fascinating fact to share with you that my parents once told me if I hadn’t been called Adam, their next choice was Brett supposedly). How nice.

So as I had become rather intrigued by this point and wanted to finally see some of this show for myself, I was very pleased to discover that all 12 episodes are on YouTube, and here’s the story. The Last Salute was a sitcom that was co-written by Tim Binding and Simon Nye of Men Behaving Badly fame, but this one was aimed at a much different audience.

It was all about the rivalry between the car breakdown services the AA and the RAC and it was set in 1961. The main character was Harry Thorpe who worked for the AA and spent most of his time going along picturesque roads on his motorbike (played by Paul Bown, best known for starring in the ITV sitcom Watching where he coincidentally also played a motorbike enthusiast).

Other characters included Harry’s sister Joyce (Jo Unwin, who unless I am very much mistaken is the wife of Chris Morris, best shown for shows including The Day Today and BrassEye. From one comedy extreme to another, I didn’t think I’d ever be able to link from The Last Salute to BrassEye in just one step), and Harry’s boss Leonard Spanwick (Philip Jackson), who is going out with Joyce, and often lapses into speaking in Esperanto. Their biggest rival was the RAC man Johnny (Brett Fancy). Episode plots included things like going to a dinner-dance and seeing the latest Cliff Richard film.

The first series of The Last Salute was shown in the Sunday 6pm slot, usually between the likes of Songs Of Praise and Antiques Roadshow, seemingly when they had run out of episodes of Last Of The Summer Wine. It was all made on location and didn’t feature a laughter track, and its portrayal of those gentle long-gone days of early-60s England drew comparisons with ITV’s drama Heartbeat.

The second and final series was set in 1962, and its final episode was moved from 7pm to 4:10, although it seems that it was because of sports coverage in the evening and not because it had flopped with viewers. The Last Salute doesn’t even have a Wikipedia entry, and it has not been released on DVD, and I’m fairly sure that it hasn’t been repeated since. It was definitely good to finally see it for myself though. 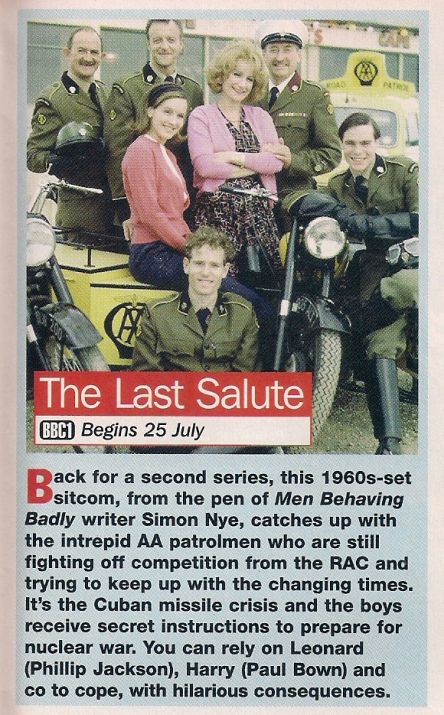