Following on from Thomas Dolby’s “Hyperactive!” which is one of my favourite music videos from the 80s that I reviewed on here recently, I thought that I would take a look back at another rather strange and creative video from this decade. When I discovered this one on YouTube a while ago when trying to find some more 80s hits it was another video that I thought was a classic.

“Bridge To Your Heart” was released in July 1987 and was the biggest hit in the UK for the group Wax, whose members included Andrew Gold, best remembered for his hit songs in the 70s including “Never Let Her Slip Away”, and 10cc’s Graham Gouldman. The video was directed by Storm Thorgerson and it definitely stood out. Let’s take a look at some of the highlights. Hold it… now!

Firstly, as far as I can tell, none of the video is computer-generated, it’s all traditional stop-frame animation. There must have been a huge amount of time and effort put into making this but it was worth it. Being able to watch this video’s fast-moving effects again frame-by-frame does make me see a lot of unusual things that I didn’t notice first time round… I mean, what it supposed to be going on here? 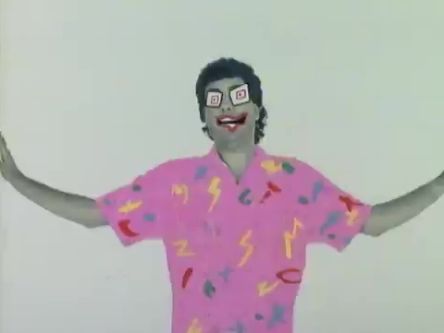 Some of the best visual effects include a lot of fiddling about with photographs, and there is also an animated sequence where a wolf gets so overexcited by someone that their heart explodes. There is also a moment where the lyric “made me the clown” seems to be taken too literally, and I also liked it when a superhero in a newspaper comic strip page comes to life. Now it’s time for an interval where the horns come in.

Then as we get near to the end of the song, there is the inevitable key change! There are also some more great moments, including a bridge being built out of brightly coloured children’s blocks that then tumble everywhere, and what has to be my favourite moment in the video when it seems for a brief moment that Graham and Andrew have gone down the seaside to perform the chorus to the song.

I’m not sure if the video to “Bridge To Your Heart” won any awards, but it was a big hit across Europe, making the Top Ten in a few countries. Along with “Hyperactive!”, this is definitely another one of my favourite music videos from the 80s, easily up there for me with the great “Sledgehammer”. I’ll try and review one more strange music video before the end of the year.