Nathan Barley is a sitcom that was rather well documented and analysed when it was originally shown, mostly because of the writing team behind it. In the late-90s there was the TV listings parody website TVGoHome. I don’t remember reading it much at the time, but it soon became popular, and in 2001 there was a book released and a TV series on E4 (that I reviewed a while back).

The website was created and written by Charlie Brooker, who has gone on to further success in more recent years. One regular character featuring in the listings was the rather irritating Nathan Barley. In 2005 Channel 4 transferred this to TV, and it was co-written by Brooker and Chris Morris, who had also worked on The Day Today and BrassEye, widely regarded as two of most innovative comedy shows of the 90s. 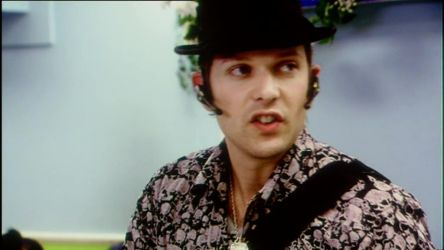 This meant that expectations were high with viewers, who were expecting the show to be rather hard-hitting and memorable. Indeed it seems that there was much discussion about the first trail for the show, never mind the first episode, as viewers debated whether the look of the show would fit in with what they expected, and just how sharp the satirical observations would be.

Nathan Barley (played by Nicholas Burns) is someone who is into all of the latest technology, and he even has his own website called Trashbat, he believes that he is an important trendsetter, but he definitely isn’t. He is a fan of the magazine Sugar Ape, and he constantly pesters its writer Dan Ashcroft (played by Julian Barratt, indeed most of the cast of The Mighty Boosh seemed to be in this show, with Noel Fielding and Richard Ayoade also being among those appearing) and his sister Claire, and seems to worship them. There were also lots of other bizarre characters. There were also attempts at some bizarre catchphrases that twisted the English language, but you didn’t hear many people reference “well weapon” or “proper Mexico!”.

Nathan Barley only lasted for one series and it got a mixed response from viewers. Looking back at it now it is rather odd to see it happen before the rise of social media, you can just imagine Nathan if it was made nowadays trying hard to get a huge amount of followers for his terrible work. Also, the comparisons with what are now called hipsters almost makes the idea beyond parody. The show hasn’t vanished from view altogether though as it is still occasionally repeated rather late at night on Gold.

Nathan Barley has been released on DVD (rated 18), and there has been more effort than most releases to pack plenty on the disc. It includes a book featuring some of Nathan’s artwork, and extras included the unaired pilot. There are also some more unusual things hidden away, including an extra audio track on one episode where the voices have been redubbed by different people for no particular reason, and another episode featuring an extra subtitles track asking you why you are bothering to read them.