A while ago I did a series on here where I told the stories of some of my favourite quirky 80s pop stars. There was some good feedback, including one comment asking if I would look back at the career of Hazel O’Connor. I must admit that I wasn’t really familiar with her work, so I decided I would have a look online to find out more about her, and I was won over. Hazel was born in Coventry in 1955 and she has had success as both an actress and singer. This will be a look back at Hazel’s hit singles and some of her TV appearances throughout the 80s on YouTube, including how she (sort of) had a Number One single. After entering the music business in the mid-70s, Hazel had her breakthrough in 1980…

In March 1980 the album “Sons And Lovers” was released which wasn’t a hit. In August 1980 “Eighth Day” was released which reached no. 5, and was Hazel’s first Top Ten hit single. It featured in the film Breaking Glass where she starred as a singer called Kate which made her name and earned her a Bafta nomination. Also among the cast were Phil Daniels, Mark Wingett (who would later go on to further success in The Bill), and Mark “Zaphod Beeblebrox” Wing-Davey). It seems that Hazel also unintentionally invented Tron during the film. 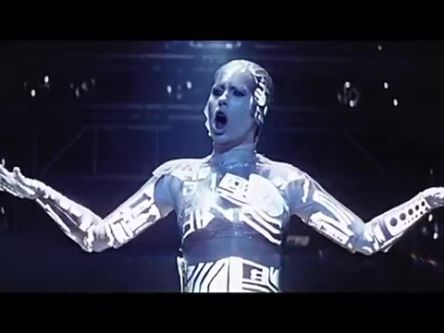 Hazel also appeared on BBC1’s Film ’80, and performed “Eighth Day” in the first of her four appearances on BBC1’s Top Of The Pops, and she also made the first of her three Record Mirror cover appearances. Well done Hazel that looks like! Also in August 1980 the Breaking Glass soundtrack album was released which reached no. 5. It has also been released on DVD and it really is a fascinating watch.

In October 1980 “Give Me An Inch” was released which reached no. 41, another single from the Breaking Glass soundtrack. Also around this time Hazel appeared on BBC2’s The Old Grey Whistle Test. In March 1981 “D-Days” was released which reached no. 10. This led to a rather energetic performance on Top Of The Pops. In April 1981 Hazel appeared on the cover of Record Mirror again and Smash Hits for the first and only time. 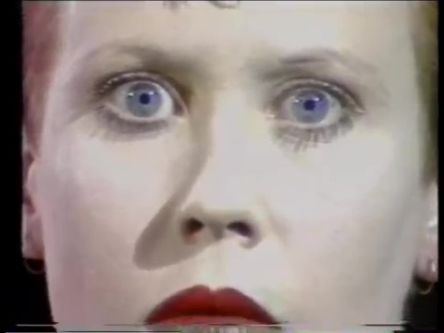 Hazel appears on the cover of Smash Hits in April 1981

In May 1981 “Will You” was released which reached no. 8, and it was Hazel’s third and final UK Top Ten hit single. It would also turn out to be her final Top 40 single too, leading to her final Top Of The Pops appearance, along with BBC2’s Six Fifty-Five Special. Although it wasn’t Hazel’s biggest hit, it seems to be the one that has endured the most, and it is the most likely to be played on the radio nowadays, mostly because of its famous saxophone solo. June 1981 saw her third and final Record Mirror cover.

In August 1981 “(Cover Plus) We’re All Grown Up” was released which reached no. 41. I’ve found a couple of performances of this song online that I thought were rather enjoyable. And as ever, it’s tough to choose a favourite single, but this one is definitely among them. Also in this month Hazel also appeared on BBC1’s Get Set For Summer and made the first of three appearances as a panellist on BBC1’s Pop Quiz. In September 1981 the album “Cover Plus” was released which reached no. 32, and it was Hazel’s final UK hit album.

In October 1981 “Hanging Around” was released which reached no. 45. This was a cover of a song by The Stranglers. In January 1982 “Calls The Tune” was released which reached no. 60, and this turned out to be Hazel’s final UK hit single. Also around this time Hazel appeared on the CITV shows No. 73 and Razzmatazz. Although Hazel would have no more hits, she would continue to have some success in the 80s with her acting career and contributions to charity records.

In 1982 Hazel starred in ITV’s Jangles (which I reviewed on here recently) where she played a schoolgirl called Joanne (even though she was about 26 at the time) who dreamed of being a pop star. Sue “Audrey off Coronation Street” Nicholls played her mum. I thought it was great and the character of Herald is my new favourite thing. During the series she performed some of her own songs including “(Cover Plus) We’re All Grown Up”, along with covers of “School’s Out” and “Anything Goes”. 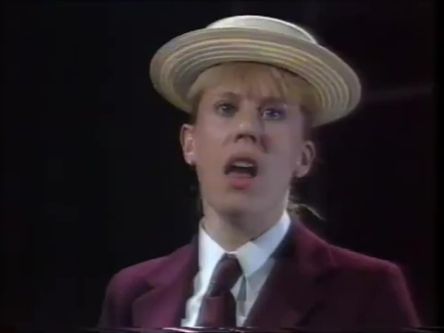 In 1983 Hazel appeared in the video for “Who’s That Girl” by the Eurythmics and was on Pop Quiz again. In February 1984 “Don’t Touch Me” was released which reached a disappointing no. 81. George Michael appears in the video for this one. The album “Smile” also failed to chart. Also around this time Hazel was interviewed on Channel 4’s The Tube. In June 1984 Hazel made her third and final Pop Quiz appearance. In September 1984 Hazel contributed to the Channel 4 series Ladybirds and was interviewed in TV Times. 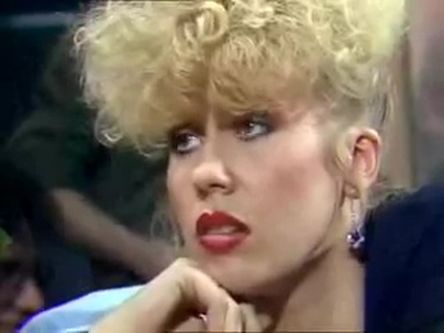 In August 1986 Hazel starred in a BBC1 drama series called Fighting Back where she played a struggling mother called Viv which earned her a Radio Times cover. And yes, she also performed the theme music which was released as a single. Also in 1986, Hazel appeared in BBC2’s Alas Smith And Jones, Channel 4’s Prospects, and the film Car Trouble which starred Julie Walters. 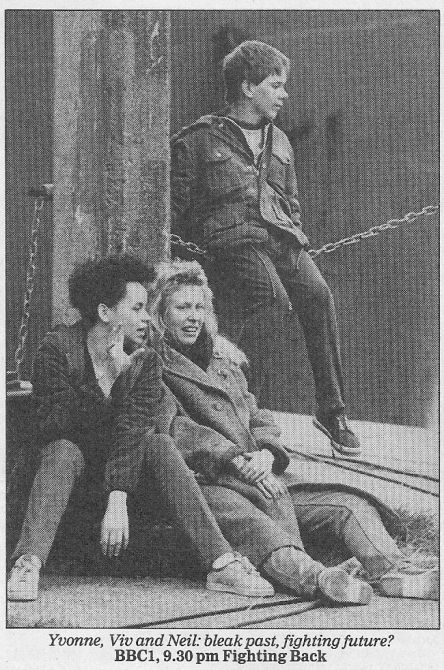 In April 1987 Hazel was one of the many contributors to “Let It Be”, a cover of the Beatles song for the charity Ferry Aid, which reached no. 1. Also in this month Breaking Glass was shown on Channel 4 and Hazel was interviewed in TV Times again. In November 1987 Hazel contributed to “Wishing Well”, another charity single this time as a part of the group GOSH which reached no. 22. In more recent years, Hazel has released many more albums and continues to tour the country and perform all her famous hits. 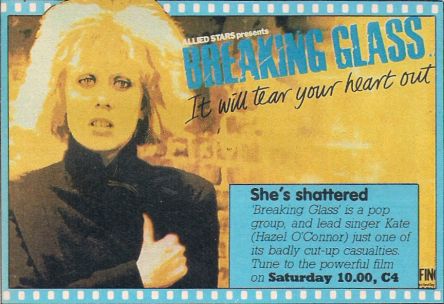 UPDATE! Shortly after completing this piece, the woman herself retweeted the link to it, and she also replied to me, saying that she thought it was “lovely”. I was so thrilled, I never expected a response from any of the pop stars that I have written about on here so a big thank you to Hazel for doing that.

7 thoughts on “The YouTube Files – The Hazel O’Connor Story.”