Some types of programming that you shouldn’t really expect to see me sharing memories of on here are ones that are about things like cookery, gardening, fashion and so on. There seemed to be a big craze for home makeover shows and so on about 20 years ago, although I was never really interested in them, and that also counts for game shows about those genres.

This meant that I never had any interest in shows like Can’t Cook Won’t Cook, and I occasionally watched the original version of Masterchef in the 90s, the only cookery game show that I really remember watching regularly (partly because it was shown so frequently) was the daytime show Ready Steady Cook. This was the against the clock challenge so make sure that those pots and pans are at the ready.

In every edition two contestants took part and they were paired with a professional chef (usually taken from a pool of about ten regulars) as the green peppers team and the red tomatoes team. They were given a budget of £5 and had they to use their five ingredients to make a meal in 20 minutes, and the host would often check how they were getting on. When time was up the studio audience voted on who they thought should win based on how creative they were, with a special prize for the winners! 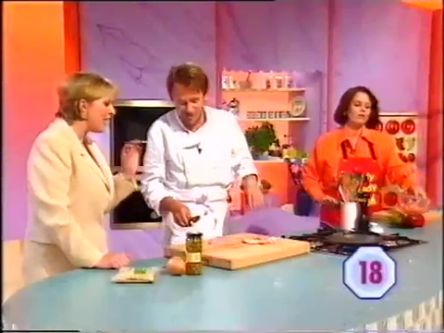 Ready Steady Cook was originally hosted by Fern Britton, and one of the regular guest chefs who made the biggest impact on the show was Ainsley Harriott. He had appeared in a few comedy shows in the early-90s, and he brought his enthusiastic style to this show. He ended up becoming so popular with viewers that when Britton left the show 2000 he became the new host (at which point the show was extended to 45 minutes), and stayed until the end.

Ready Steady Cook was successful enough for there to be an inevitable spin-off celebrity series (which ran for about 100 editions on BBC1 from 1997-2003), and there also a lot of books released featuring the best recipes from the show. There were some changes made to the format in the later series, and by the end every edition featured celebrity contestants, with one edition featuring none other than the two ladies from Bananarama competing against one another (I have to go on about them all the time! I might take a look at their game show appearances in a separate piece). 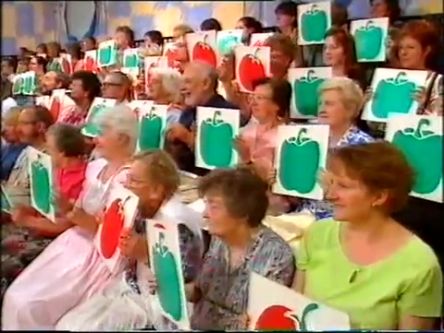 To fill the extra 15 minutes sometimes the chefs made an additional meal, and there were a few twists to the rules, such as the ingredients being chosen at random or the ingredients budget being less or more than £5. By the time that Ready Steady Cook came to an end in 2010 I didn’t watch it so much, and almost 2,000 editions made been made, making it one of the most successful BBC daytime game shows.