This is a comedy panel game, and although lots have come and gone over the years, Have I Got News For You is just about the most successful of the lot, having now been on our screens for over 25 years. Its history has been well-documented, so there’s not really that much that I can add to it, but because it’s a show that I have watched regularly over the years I might as well do a review of it.

The origins of Have I Got News For You are in the BBC Radio 4 comedy panel game The News Quiz that launched back in the 1970s, where various panellists would discuss the most amusing headlines of the week. In 1990 this transferred to BBC2, and there was an unaired pilot hosted John Lloyd, before Angus Deayton took over, who at the time would’ve been most familiar to viewers from his appearances in the comedy show KYTV.

He was joined by two regulars who were the team captains. They were Ian Hislop who has been the editor of the satirical magazine Private Eye since 1986, and Paul Merton, who at the time of the launch of Have I Got News For You was causing a stir with his surreal flights of fancy on various shows including Channel 4’s improvisation comedy game Whose Line Is It Anyway?, and his views on the news have been some of the show’s highlights.

Every week they would be joined by two panellists, usually a comedian or a politician. A lot of rounds were tried out over the years, but the format eventually settled down. The most famous rounds include the Odd One Out round, and most editions would end with the Missing Words round, where anything could happen, with amusingly wild guesses as to what the headlines were really about. Although this is another show where who wins doesn’t really matter, Paul’s team did seem to win more often than not. 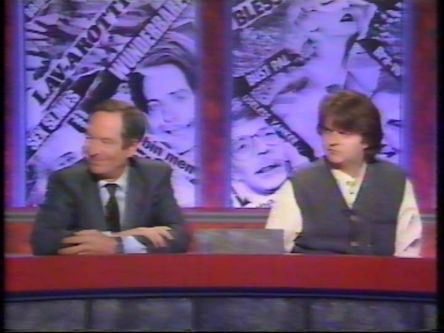 There were also regular specials including when there was an election or at Christmas, and after a decade of being one of BBC2’s most successful shows, in 2000 it transferred to BBC1 where it was looking like it was going to continue down its usual satirical route, but in 2002 Deayton was let go as host and things have never really been the same. The show has now been going for longer without him than with him, and every edition still has a guest host.

Have I Got News For You has been popular enough for there to be some merchandise including a couple of books and some classic episodes have been released on DVD. Several series have also been repeated on various channels and in more recent years an extended version has been shown in a late-night slot. There seems to be no plans to bring the show to an end so various public figures could be in for a ribbing for a long time to come yet.

One thought on “More TV Memories – Have I Got News For You.”