This is a show that I have wanted to write about on here for a long time, but my memory of watching it is just too vague, so I was very pleased when I discovered that it had been released on DVD. In recent months I have written about various quirky female pop stars with strange hairstyles from the 1980s that I have enjoyed, when I remembered that there was yet another singer who perfectly fitted that description… and this time they’re animated!

Jem is a cartoon that was launched in 1985 and starred a young lady called Jerrica Benton. After the death of her parents, she inherited their music company Starlight, and also their foster home for orphaned girls. Jerrica has a special pair of earrings that are connected to a computer called Synergy (“the ultimate audio/visual entertainment synthesizer”), and when she says “showtime, Synergy!” into them (one of the show’s catchphrases), she is transformed into her pink-haired pop star alter-ego Jem (Jerrica’s mother Jacqui was also a successful singer in the 70s).

Jem is the frontwoman of a pop group called The Holograms and only her bandmates are aware that she is both Jerrica and Jem. They are Jerrica’s younger sister Kimber (who also has the show’s other famous catchphrase “truly outrageous!”), along with Aja and Shana (who are later joined by a fifth member Raya). Jerrica also has a boyfriend called Rio who isn’t aware of her double life, and he soon falls for both Jerrica and Jem, not realising that they are the same person, meaning that he is in a love triangle featuring only two people. And you thought Gary Sparrow had it bad.

Also featuring are a band called The Misfits, who have slightly more of an edge to their sound and they often compete with The Holograms to be the most successful. They also have a very distinctive look and are a trio consisting of Pizzazz, Roxy and Stormer (who are later joined by a fourth member, the English-born Jetta, and in a terrific piece of useless TV trivia, Jetta was voiced by the daughter of crooner Engelbert Humperdinck), and along with their boss Eric Raymond they are convinced that they are the best band around.

As the episodes progress we see what life is like for Jem (who had a different actress provide her speaking voice and her singing voice), and it is rather glamorous, as we see her do things like work on her songs, appear on TV shows and radio stations, star on the cover of magazines, attend award ceremonies, make music videos, and perform at concerts and festivals around the world. You really could say that she’s lived the life of an international pop star. 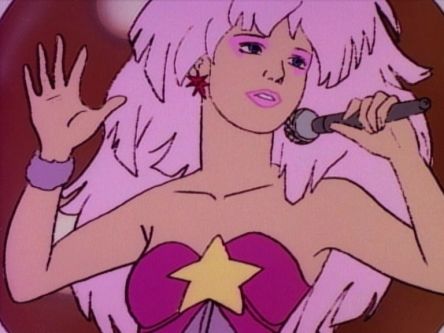 We also meet a few other characters along the way including The Misfits’ biggest fan Clash who is always trying to become a member herself, Jerrica’s friend Danse, the TV presenter Lindsey, and many others. And of course, there is always a big cliffhanger conveniently placed just before the advert break (the breakbumpers have been left in on the DVD), but Synergy usually comes to the rescue just in time.

A lot of songs are also performed, and about 150 of them (all about a minute long) were specially written for the show, accompanied by a stylish music video. By the third series a third group was added to the show. They were The Stingers, who featured a male lead singer called Riot, accompanied by the German-born Minx and Rapture, and Riot would also fall for Jem, but he was more in love with himself than anyone else seemingly. 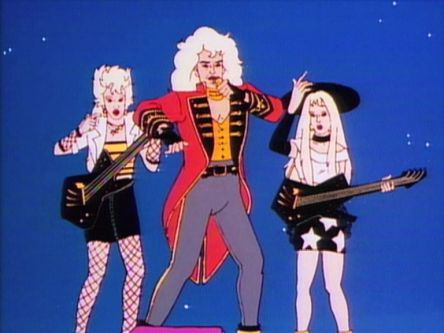 I couldn’t remember if Jem was shown on CBBC or CITV in this country, but it must have been shown on some children’s TV show, and doing a little more research it seems that it was actually shown on TV-am’s Saturday Morning show The Wide Awake Club that was hosted by Tommy Boyd for a while around the 1987/1988 mark, so if I did see it anywhere on TV, it must have been there.

Jem was popular enough for there to be a lot of merchandise released, including dolls of all the main characters that were usually accompanied by an audio cassette of some of their songs from the show, and various episodes were released on VHS. It seems that there was also a short-lived comic of Jem published in this country around 1986/1987, featuring strips along with features about the big pop groups around at the time including Five Star! 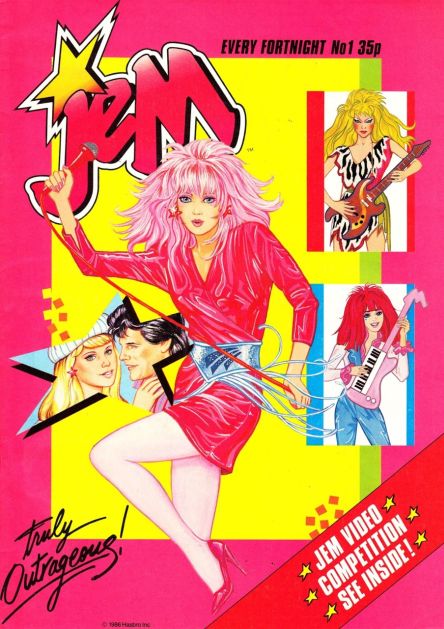 Jem was cancelled in 1988 after three series and I was pleased to discover that all 65 episodes have been released in a DVD boxset over ten discs. There are no extras as such (it seems that the American DVD release did come with an 11th disc of special features) but a small amount of episodes end with the equivalent of a Public Information Film so make sure you always do as Jem says.

In more recent years, there was a brief revival in the popularity of Jem when in 2015 a live-action film was made to try and bring the show to a new generation. I haven’t seen it myself but just about all the reviews have said that it was terrible and not like the 80s cartoon version at all, and it is best forgotten, being an unsatisfactory addition to the story. However, it was great to finally see all the episodes of this show, there’s no doubt that Jem really is a chart-topping star.