Nothing to do with a film starring John Cleese, Clockwise was a CBBC game show I remember watching in the afternoon, but the final series was actually shown as part of CBBC’s Saturday Morning show Going Live! when seemingly they had run out of editions of Double Dare. There were two versions of Clockwise that had slightly different formats that packed a lot of gameplay into its 15-minute timeslot.

The first version was hosted by Charlotte Hindle who had also appeared on CITV’s Get Fresh a few years earlier. Three teams of two took part and the show was based around time and numbers. In the first round questions (including some multiple choice ones) were asked on the buzzer, with five points for each correct answer, and the round ended when the first team gave six correct answers to score 30 points. 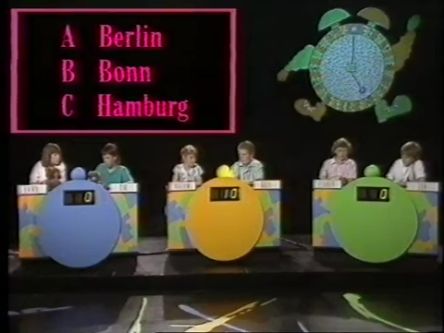 In the second round each team was shown a grid that contained various numbers that corresponded to an answer. They then had 45 seconds on the clock to match the numbers with the answers, with five points scored for every correct answer. This was followed by a physical challenge-style round where the teams had to complete a task against the clock, with five points on offer for the first to do so. 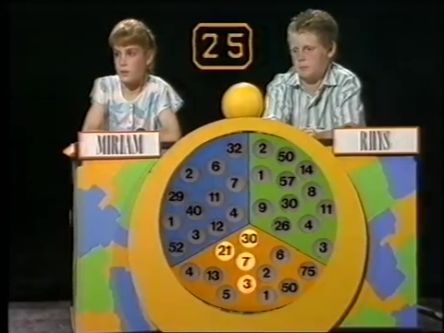 The next round was similar to an earlier one, but this time it was a free-for-all with one more grid of numbers shown which was open to all teams on the buzzer, with again five points for a correct answer. At the end of this round, the lowest-scoring team was eliminated and they took away the consolation prize of a pen, how exciting.

In the next round the two remaining teams had a scale that had ten notches on it. After they buzzed in and gave a correct answer, they could decide to either move up two notches for ten points, or move their opponents down one notch and have five points deducted. The first team to reach the tenth notch at the top went into the final, with the eliminated team taking away a pen and also a clock.

In the final, there was a clock with twelve lights on it at every five-second interval. There was one minute on the clock, and for every correct answer one of the lights came on, and the more lights that were on when time ran out, the more prizes they won. And the three highest-scoring teams came back at the end of the series to compete for even more prizes and the chance to be the overall series champion.

The second version of Clockwise featured some changes, the biggest being a new host who was TV newcomer Darren Day, and he would go on to host further game shows in the 90s including the final two series of ITV’s You Bet! Although the main gameplay element was the same, other changes included a new set design, the physical challenge round seemed to feature more gunge, and the final round was renamed The Time Tunnel.

In this restyled final, the winning contestants again had to answer questions correctly with one minute on the clock to win as many prizes as they could, but this time whilst doing so they were travelling down a spooky track whilst being sprayed with silly string and the like and just generally being distracted. Clockwise ran for three series and was good fun.