It’s time to review another celebrity panel game. Call My Bluff launched on BBC2 in the mid-60s and it became very popular, but the era I will be looking back at is when the show was revived on BBC1 in the mid-90s and was hosted by Bob Holness until 2003. Bob of course also hosted Blockbusters which is one of my all-time favourite game shows, and it was a pleasure seeing him on TV again.

This version of Call My Bluff was shown in a weekday daytime slot. Two celebrity teams of three took part, and when the revival began they were captained by regulars Sandi Toksvig and Alan Coren. This was a show that was all about some of the more unusual words in the English dictionary. A bell would be rung by Bob and then the word would appear on the screen. 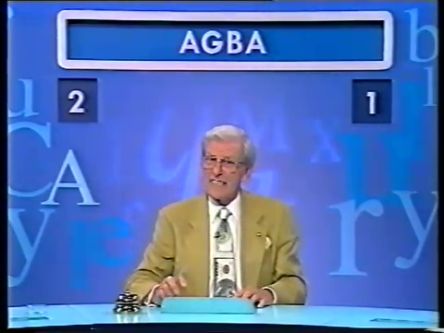 All three of the panellists on the team would then give a definition of what the word actually meant, and some of these could be rather far-fetched, but only one of them would be telling the truth. A member of the opposing team would then be challenged to determine which one of the definitions is correct. The chosen panellist then reveals on a piece of paper whether they gave the true definition, or if it was a bluff. If they get it right, they score one point. If they don’t, the opposing team gets the point on offer. 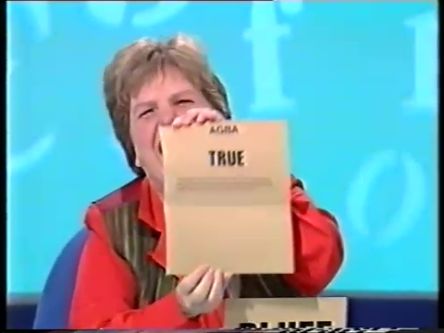 After this, Bob would ring his bell to reveal the next word and the cycle begins again. There would be about six words in every show so every panellist would get at least one chance at trying to find the right definition. And although points were on offer, this was one of those shows where it didn’t really matter that much who won as long as everyone joined in.

The revival ran for almost a decade on BBC1 to go along with the almost 25 years it ran on BBC2, and Call My Bluff is among the small amount of UK game shows of which there have been over 1,000 editions produced, and as it ran for a combined 35 years on TV it was definitely an idea that endured. I only really got to watch the show in the 90s during the school holidays sometimes but I do remember enjoying it.

One interesting thing about the show was seeing who the panellists where. For example you knew that there were laughs guaranteed when comedians like Tim Vine who always had funny stories to tell were taking part. Another impressive thing was the remarkable amount of strange words that were featured where it really would be a challenge to determine the correct answer. It was a show where you could learn some quirky things and it had the “really, is that right, I never knew that” factor.

One thought on “Game Show Memories – Call My Bluff.”