Stars In Their Eyes Champion Of Champions (ITV, 1999)

This is another variation on the popular singing contest Stars In Their Eyes. After the end of the 10th series in 1999, the decision was made to have the ten series winners compete against one another to determine who was the best of them all from the past decade in a special live edition shown on ITV in October 1999 that was almost two hours long and I remember watching it at the time. Matthew Kelly was the host and he wore his fanciest bow-tie for this big occasion. 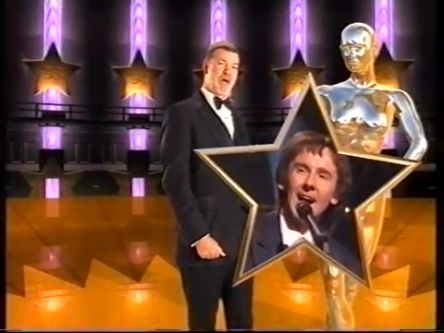 This edition was a sort-of deluxe version of a grand final, and all ten of the series winners took part, from singers as Shirley Bassey who won the first series in 1990 to Chris De Burgh who won the most recent series in 1999, and they went through those famous doors to be transformed into their singing idol one final time, with their performance accompanied by a live orchestra. 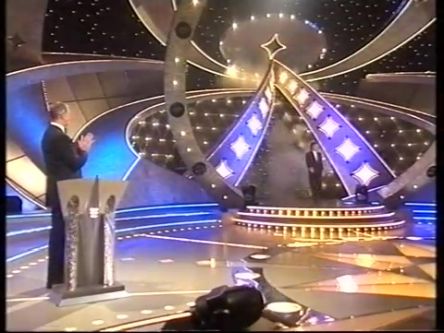 Everyone who took part was also given a small silver trophy to acknowledge their success, and we also discovered what they had all be up to since becoming a champion. Also, the specially invited studio audience consisted of the contestants’ friends and family, plus some celebrities, who mostly seemed to be from the cast of Coronation Street.

After everyone had performed, the phone-lines were then opened for about an hour, and you could even vote through their fancy new website. Who would the ITV viewers determine as the winner? Matthew’s virtual friend Hayley revealed the results. It turned out to be Ian Moor whose performance of Chris De Burgh’s 1986 chart-topper “The Lady In Red” received over 480,000 votes and he won by a big margin, with more than double the votes of the second-placed contestant, winning him the main trophy and a lot of applause. He was rather pleased. I thought that this was the edition where the man himself joined Ian on stage to congratulate him on his success, but that was actually when he performed again at the 2000 grand final. 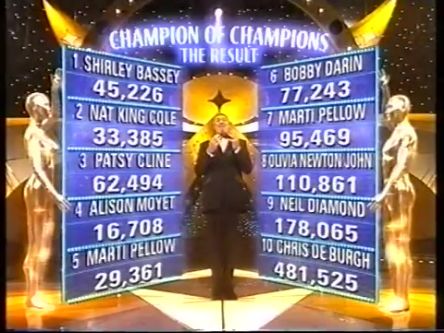 Stars In Their Eyes was a long-running show and there were several more variations on the format over the years, including lots of celebrity specials, a children’s series, and even a version featuring singers from across Europe, along with the revival a couple of years ago, but I wasn’t as big a fan of those versions, this edition was definitely one of the highlights of the show’s run.

One thought on “Game Show Memories – Stars In Their Eyes Champion Of Champions.”