I have noticed that one of my most popular blog pieces is my review of the classic game show Wheel Of Fortune. I know that this was a show that was based on an American format, so once again I decided to look at some editions on YouTube from throughout the years. One of the things that I was surprised to discover was that Wheel Of Fortune has been running on American TV almost continuously since the mid-70s.

The rules of the American version of Wheel Of Fortune are just about the same as the British one. Three contestants take part and they have to solve word puzzles and spin a wheel to determine how much they are playing for. One major difference is that in the American version, they are playing for money. In the British version that launched in 1988 contestants played for points at this stage of the game, because of the restrictions on prize money at the time there was never really a chance of a “fortune” being given away. 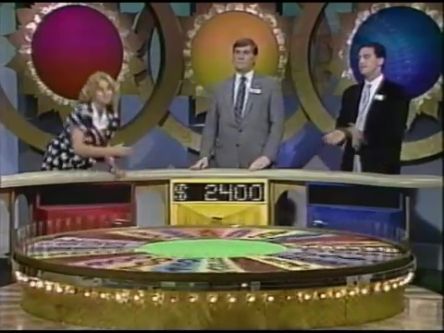 Also in the early series of the British version, contestants had to answer a question before they have the chance to spin the wheel. Every time someone solves a puzzle, they win a bonus prize, and there are lots of bonuses available on the wheel too alongside the money values, but watch out for those bankrupts! The contestant who has made the most money then goes into the final. If they can solve one final puzzle after selecting various letters, then they win a big prize, and lots of cars and holidays would be given away. 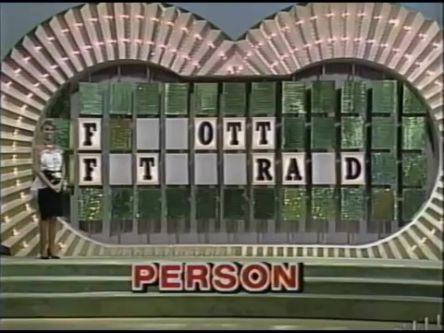 The American version of Wheel Of Fortune has had various hosts but it has been hosted by Pat Sajak and Vanna White since the mid-80s. Watching some editions from more recent years I noticed that thanks to improved technology each individual letter is now a screen which has to be touched to reveal the letter, rather than having a panel that had to be physically turned around, although this never happened in the British version.

Wheel Of Fortune eventually ran on British TV for 13 years, although the final few series were shown in a daytime slot. The American version has now been on TV for over 40 years and remains popular as it still offers lots of big prizes. Of all the game shows that could be revived, one that I really would like to see have another go on British TV is Wheel Of Fortune because now prizes really could be given away that are as big as what’s on offer in America and I think that it definitely has the potential to be really fun and exciting to watch.