Men Behaving Badly was a sitcom that was written by Simon Nye. The show originally starred Martin Clunes (as Gary) and Harry Enfield (as Dermot) as two young flatmates who tried to get through life. Enfield had been a great success in sketch shows but looked a little more uncomfortable in a sitcom so he decided to leave after the first series, and he was replaced by Neil Morrissey (Tony) who along with Gary became the show’s best-known double act. Also appearing were Dorothy and Deborah who lived nearby.

Gary works in an office alongside two very dull middle-aged colleagues which bores him greatly, so he often likes to spend his spare time partying with Tony, and they both have a rather laddish outlook on life. They could often be found in the local pub, and when they were at home, there was always a can of lager nearby. They also liked to flirt with the two ladies and just about any other woman they met but they often embarrassed themselves. Most episodes ended with Gary and Tony sat on their sofa in front of the TV thinking about what they had learned from what had happened to them in the episode (which wasn’t much).

Men Behaving Badly got off to a fairly quiet start and its success almost didn’t happen. The first two series were shown on ITV in 1992 in a pre-9pm slot and they didn’t get a big response from viewers, so the show ended. A couple of years later, the production company thinking the characters still had potential decided to take the show to BBC1, where it returned for a third series in a post-9pm slot allowing for more bad behaviour from the men and it really began to make a big impact, and eventually it became one of the most successful British sitcoms of the 90s. 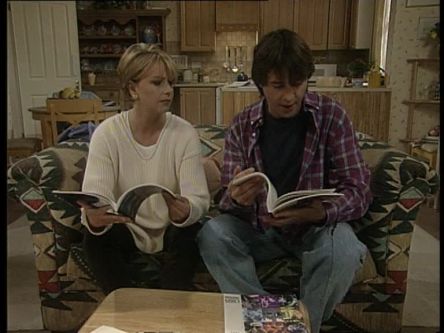 Men Behaving Badly eventually ran for six series. It won many awards and also had a few Radio Times covers. Because of the popularity of the show, in 1998 they decided to bring it to an end by doing the same with what they did with Only Fools And Horses. When that show ended (for five years at least), there were three extra-length episodes shown in quick succession over Christmas which were a huge success. In the final trilogy of this show Deborah gave birth in the very last episode.

Men Behaving Badly was released in the fairly early days of DVD, so unfortunately there aren’t that many extras included beyond a few funny out-takes that you have to press a few buttons to find. Another thing that I remember about Men Behaving Badly was that because it always did well in the ratings, some episodes (from around the series four or five point) seemed to be repeated frequently on BBC1 in the late-90s, but I always enjoyed watching them as they were among my favourite episodes and they are still really enjoyable now.