Over the years I’ve enjoyed playing a lot of board games, including Trivial Pursuit, seen by many as the ultimate general knowledge game to play. This meant that it seemed a fairly obvious choice to convert into a TV game show. There was one attempt on BBC1 in the early-90s, but this piece will concentrate on the second version which was another Action Time production, it was shown on The Family Channel which would evolve into Challenge TV by 1997, and it was hosted by Tony Slattery who was appearing on TV very regularly at the time. 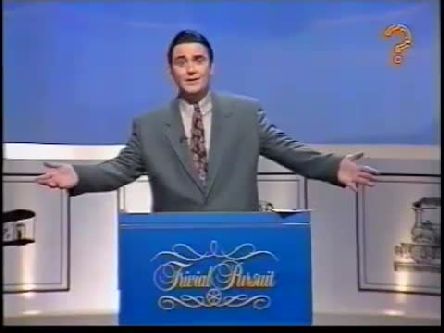 Three contestants took part and the idea was that they had to fill their all 12 slices of their pie by answering the questions on the six categories available, essentially getting two correct answers for every colour available. In the first round the six traditional categories from the board game were used with one question per category. Contestants picked a category, and then they were given the question, but if they got it wrong, it went on offer for the other two to steal.

In the second round, the six categories were changed so that they were all related to entertainment in some way. There was also a bonus on offer where a news clip from the archive would be shown and the question would be based on it. If they got it right they would win the slice, and then they would be asked a second question where if they got that right they could remove an opponent’s slice.

In third round the categories changed again. This time a contestant could play for a category, and then nominate who faces the next question. The final round was against the clock reverting to the traditional six categories. Whoever buzzed in could choose the next category and carried on until they got one wrong. If a contestant completed all 12 slices of their pie they went into the final, and the two remaining contestants played until time ran out for the runner-up prize of a glass bowl. However, if no-one had completed their pie by the end, the contestant who had the most slices when time was up was the winner, with the other two receiving consolation prizes of a The Family Channel T-shirt and a deluxe edition of the board game. 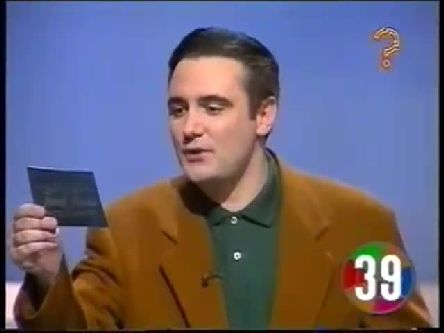 In the final, the remaining contestant also won an extra prize of a VHS looking back at the news in the year that they were born, and they played for the star prize. They simply had to get six questions right, one in each category, in 60 seconds to win a holiday. I get the feeling that they could’ve been a little more imaginative with the rules for this final but either way there were a lot of winners.

One curious thing about Trivial Pursuit was that it seemed to have some mistakes left in such as contestants picking categories that had already gone and Tony fluffing some questions. Also, The Family Channel must have had a very small audience in those days so it should be commended for making some original shows along with the repeats of classics, and Trivial Pursuit itself was repeated well into the Challenge years.