Around the late-90s/early-2000s there were a lot of various one-off late night compilation shows that looked at various clips of unusual TV moments, such as adverts, award ceremonies, or those Before They Were Famous and TV Nightmares-type shows. I recently came across a 40-minute show called TV’s Finest Failures which was based all around unaired pilots, and it was hosted by Phill Jupitus.

As far as these shows go, it was the usual combination of rather over-familiar supposedly terrible TV moments combined with a few rare and interesting things, and at the very least every clip shown was of broadcast quality, albeit put inside a TV screen shape. “Welcome to a guided tour of TV’s chamber or horrors” began Phill. In this piece I’ll go through the highlights of what was featured, beginning with a look at game shows. 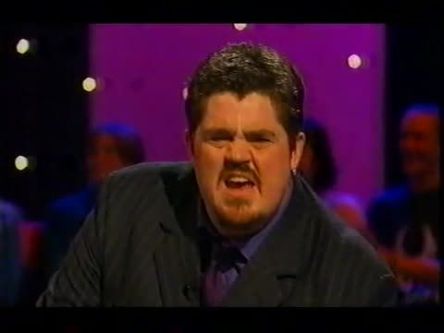 It’s wacky, it’s fun, it’s crazy, it’s outrageous… it’s the unaired pilot of Fun House featuring adult contestants which was hosted by Linda Lusardi? Also something called You Must Be Joking! with Terry Wogan, and other thing called Pardon My Language. We also saw some American game shows, including Beat The Genius, where contestants had to play against a masked quiz genius. Clearly a forerunner of The Chase. Plus also The Better Sex, where a team of six men took on a team of six women, and Beat The Chimp. 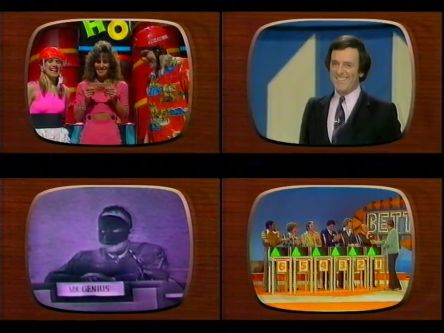 Now this is an odd one. In 1997, there was a great game show hosted by Tim Vine on Channel 4 called Fluke. He then went to America and hosted a pilot which was a variation on this show called Beat The Chimp, with no success. But this clip is hosted by someone else. Did they make another pilot with an American host, or did it get a series? Either way, it’s a ridiculous show, where “the more you know, the less it matters!”. Hey that’s Tim’s catchphrase, give it back! 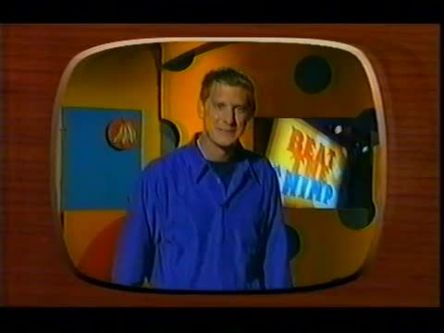 Phill also had a special studio guest who was Richard Whiteley, who spoke about Countdown. It may seem odd that a show that has now been running for almost 35 years featured, but there was a look back at the low-tech and rather shambolic unaired pilot. Thank goodness they persevered as Countdown would grow into a very successful and much-loved show. “Why am I on a show called TV’s Finest Failures?” was Richard’s conclusion. 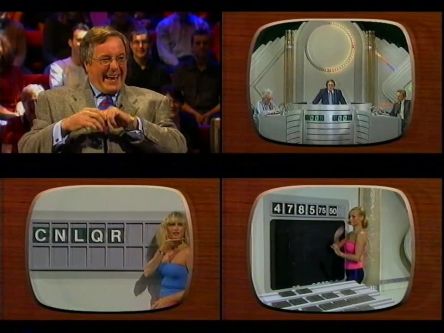 Then there’s a look at some science-fiction shows including K9 And Company and various other rotten American dramas. This is followed by more oddities including CBBC’s Sebastian The Incredible Drawing Dog with Michael Barrymore, some embarrassing sitcom called Sidney You’re A Genius featuring a young beardless Matthew Kelly, plus some unidentified thing starring Vic Reeves, Richard Stilgoe entertaining a row of empty chairs, Esther hosting That’s Life! Junior, and the wonderful world of Billy Boyle.

One show I found particularly intriguing was a comedy sketch show called The 21st Century Show. It said that in the future BBC3 would be a 24-hour news channel, BBC9 would feature naked weathermen, and BBC43 would feature coverage of Romanian gymnasts. I wonder what the origin of this show was? Plus there also the staples of these type of shows, BSB’s sitcom Heil Honey I’m Home! (a full series was made which was pulled after the first episode), and Mainly For Men, a flop which has been doing the rounds since the TV Hell days.

I still have the review of TV’s Finest Failures from the London Evening Standard, and it was given a right kicking. As it turned out, TV’s Finest Failures was shown in a late-night slot on BBC1 in October 2001 (although it was dated 2000 and must have spent about a year on shelf waiting to be shown) and it very possibly could have been a failed pilot in itself. The irony isn’t lost on me.