When I was at school one of the things that I remember me and my classmates enjoyed were the Where’s Wally? series of books. This was of course where you were challenged to find our hero Wally in a double-page spread of a very detailed cartoon. It was such a success that several books were produced, and in the early-90s the whole idea was turned into a TV cartoon.

Wally had a very distinctive look that does make him stand out though, he wore a red bobblehat and glasses, plus a red and white striped shirt  Also, in the original American version of the books he is called “Waldo” so when the cartoon was shown in Britain all the episodes had to be re-voiced by the cast, and every episode was loosely based on an adventure that had appeared in the books. 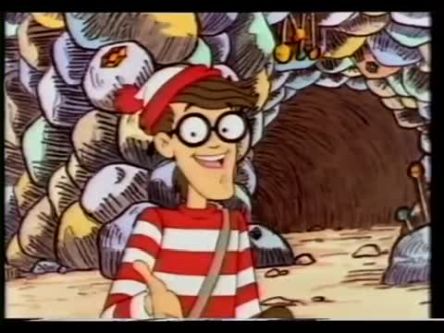 Wally also had a magical walking stick, and at the beginning of every episode he would twirl it around and then he would be able to enter various lands or periods of time such as the jungle or the Stone Age alongside his trusty dog Woof to help people out. There were a few other characters that appeared in the show. Firstly, there was Wizard Whitebeard who has various important scrolls but he often lost them.

The villain in Where’s Wally? was called Odlaw. He was essentially the anti-Wally, being dressed in a black and yellow-striped hat and shirt and having a moustache. His aim was always to thwart Wally and try and steal his stick, but of course, he would always fail. Also occasionally a female character called Wenda who was a friend of Wally and similarly dressed appeared, and every episode began with an introduction by a rather enthusiastic announcer. 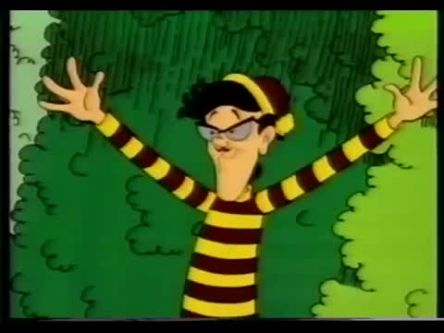 There were always a couple of sections in every episode that were similar to the books where a clock would appear on screen for about a minute and you would have to find where Wally was in the picture before time ran out, and then the story would continue, and there was a puzzle-solving element through the show. I do remember trying to find Wally while watching the show and sometimes it could be as tough as the books.

Where’s Wally? was shown on CITV in the mid-90s and I remember watching the show on Thursday afternoons, and I was a big enough fan to the point that I even recorded one episode in 1993 which I watched back a lot at the time. I was rather surprised to discover that only 13 episodes were made because it seemed to be shown rather regularly. As far as I can tell it hasn’t been released on DVD, but the books continue to be a success.