“It seems today that all you see is Family Guy on TV…” so the opening theme (almost) goes. But this isn’t going to necessarily be a piece about my favourite episodes or characters as such, it’s going to more be about the history of the scheduling and promotion of Family Guy when it was first shown in the UK in 1999.

There were already a lot of great animated sitcoms on TV at the time including The Simpsons, South Park and King Of The Hill. Somewhat unsurprisingly when Family Guy launched a lot of the publicity consisted of “if you think that the Simpsons are crazy, just wait until you see this lot!”, and the fact that the creator of the show and provider of some of the voices was newcomer Seth MacFarlane who was only 25 at the time. We first met the Griffin family in the UK when the first episode was shown on Sky One on 21 September 1999 at 8:30pm.

The main characters included Peter who worked at a toy factory, who some viewers complained was just a Homer Simpson clone, Brian the talking dog, and there was also the one-year-old son Stewie who has an English accent and originally was something of a nasty and matricidal character, but he has changed over time into a rather camp inventor of time machines. 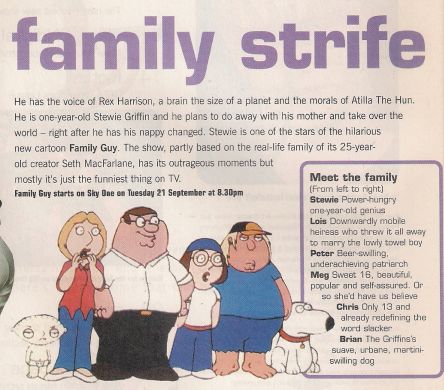 I still have a few articles about the launch, including one from Melody Maker (which incorrectly refers to the show as The Family Guy throughout). I will always associate Family Guy with the animated science-fiction sitcom Futurama, because it launched in the UK on the same day. This actually gained more publicity at the time because it was the first new show created by Matt Groening, the brain behind the massive success of The Simpsons.

I still remember watching the earliest episodes, with the famous cutaways already established. It is a surprise how scruffy the animation on the early episodes is compared to now, but they still look better than the first series of The Simpsons which looks like it was drawn with crayons now. In more recent years even Family Guy referenced the launch with an episode called “Back To The Pilot” which mocked the animation mistakes, unsettled characterisation, and a different actress providing the voice of Meg. 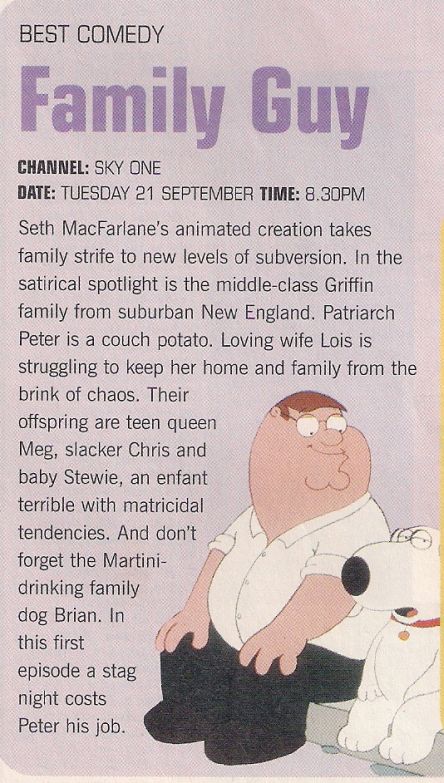 I did like Futurama and Family Guy and watched regularly, even going as far to buy the first series when it was released on VHS. Yes, it was that long ago now. Family Guy was first shown on terrestrial television in the UK in August 2000 on Channel 4 but they really didn’t know what to do with it. For a while it was shown at 6pm (the same timeslot in which they now show The Simpsons), and after a while it oddly got moved to the afternoons, meaning it ended up being edited.

The first episode of Family Guy was shown in America in January 1999 after the Superbowl so it attracted big ratings. After a few series though it was cancelled, but good DVD sales meant a revival, and the show continues to this day, with another new series starting in America soon. After a while Sky One and Channel 4 stopped showing Family Guy and it moved to the BBC, with BBC3 repeating episodes endlessly on an almost daily basis and the show finally gaining in popularity.

After the success of Family Guy, Seth MacFarlane went on to launch a second animated sitcom, American Dad. Soon Family Guy will be shown on ITV2 for the first time, presumably they think that they are going to have success with the show. Do Sky One and Channel 4 now regret losing the show? I can’t believe that I have been a fan of Family Guy for almost 16 years now.