Grampian was one of the smaller ITV franchises which served the north of Scotland and launched in September 1961. For many years their main symbol was the Scottish flag. However, when they first came on air of course it was many years before colour so in their first ident the flag had to be imaginatively designed so it featured different shades instead of colours.

By the time colour did eventually arrive in September 1971 the flag could now be correctly presented as the white saltire cross on blue, and the first colour ident featured various colours merging into one another in a similar style to ATV’s classic ident to create the flag symbol accompanied by a version of “Scotland The Brave”.

Once again unfortunately there are very few continuity clips from the Grampian region online. It does seem that they did have in-vision continuity which featured various announcers, and they also had a birthday slot which was usually shown at the end of CITV. The presenter didn’t seem to be accompanied by a puppet though sadly. I have only seen one example of a Grampian closedown but it was a very interesting watch. Their main local news programme was called North Tonight and they contributed little to the network, but I’m sure that everyone agrees that their best programme was the children’s cartoon James The Cat.

In April 1985 Grampian became one of the first ITV regions to have a fully computer-generated ident. This featured various shapes floating around the screen before forming the flag symbol and there was also another variation on the music. Again the ident seemed very similar to Channel 4’s and it was very innovative for the time.

When the ITV generic look came along in September 1989 Grampian were very keen to use it as it featured their symbol in a recognisable way and it saved them from having to put anything together themselves. And the ident ran, and ran, and ran. Some regions didn’t take the look at all, but Grampian used the ident until a new ITV symbol was introduced in October 1998, meaning it stayed on-screen for over nine years, a very long time after every other region had lost interest. 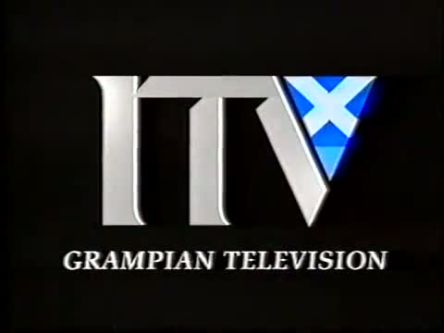 So when the time came for a new look, Grampian retained their flag symbol with a bright new ident for the late-90s, but retained the 1989 ITV music, meaning that remarkably one aspect of this look was still being used after it was dropped, almost a decade on, about a year into the new yellow on blue ITV symbol, and it seemed that Grampian were beginning to look like they were stuck in a timewarp.

Things changed though in February 2000. The flag was retired and a new blue square look was introduced inline with Scottish, with lots of lifestyle idents featuring people from around the region. The second corporate look and ITV1 relaunch was fairly much ignored by the two regions as they worked on establishing their new look and coming closer together.

By May 2006 the inevitable happened and Scottish replaced the Grampian name after almost 45 years. They renamed themselves STV, and although they insist that it is still a separate company under the name “STV North” it is not represented as such on screen, meaning another defeat for the little guys, and the STV name remains to this day.