Another game show review, and even though it was only ever shown in daytime, this show became very popular. It was partly because people were coming, and everyone’s trying. This review will mostly be based on the first series.

It was the show where people competed to become the quiz champion of Europe. Henry Kelly was the host and revealed to find that champion would take 23 weeks because of the rather compilated knockout system. But we were assured that after 92 episodes and nearly six months we would have our winner who received the star prize of a trip to the Olympics in Seoul, and there were a few other smaller prizes on offer for the runners-up.

The contestants came from 14 countries across Europe and in the rather overcrowded preliminary round they were asked “what am I?”-type questions as four were needed to progress to what was oddly called “the first round proper”.

At this point Henry would talk to the contestants about their interests and a lot of viewers found it rather amusing as he tried to start a conversation with some guy from Holland or Austria. They then answered questions on categories, the first three to score six points go into the next round.

In the four in a row round, contestants simply had to pick a category and then get four questions right in a row in the time they had. The two highest scorers then went into the final. This round was memorable for the catchphrases such as “the big four zone” and “playing catch-up”. The winner was the first to nine points. Congratulations Hans, you’re into the next round! This carried on for endless weekly finals, semi-finals and so on until they finally got their super champion many months later. 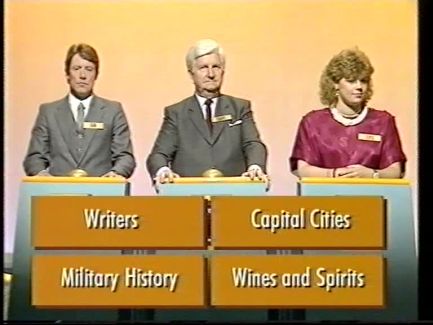 This format carried on for many years, until curiously, in the final series the show only featured contestants from the UK so they were all representing their various counties to keep it competitive. I do believe that the early series were shown across Europe though and it gained a following in various countries.

Going For Gold ran for nine years on the BBC, and a few years later, Channel 5 revived the show under the name One To Win (not to be confused with the other One To Win that I reviewed recently that was actually a revival of Bob’s Full House). Then, about a decade later, Channel 5 revived it again, but this time back under the Going For Gold name. However, this time it was an hour long so there was a lot of padding with annoying phone-in competitions and it lasted just one series.

I did enjoy watching Going For Gold but it’s not my favourite BBC daytime game show, I’ll writing about that soon, it’s a show that is less famous but I think is a lot better. The Going For Gold format does still linger though, the French version is still very popular to this day.